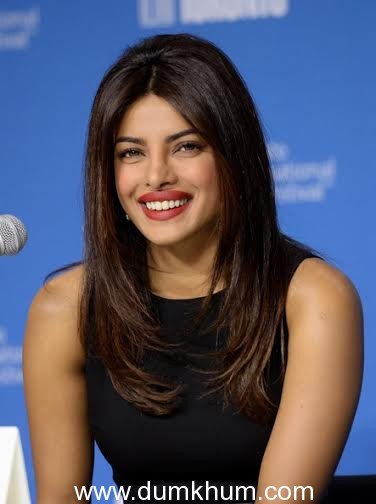 Actress and international icon , Priyanka Chopra, makes her big television debut with ABC Network’s Quantico . With Quantico, Priyanka becomes the first Indian to headline an American tv series, as the show premieres 27th Septemberand is already being celebrated as the next big thing to watch out for in the country.

Quite recently a special screening of Quantico was organized for the biggest media publications in the West and Bollywood’s very own Priyanka Chopra, passed with flying colors.

The actress was lauded for her portrayal of Alex Parrish , with the international press calling her “confident”, “seasoned” and “charismatic”.

While  the New York Times said , “The strongest human asset in “Quantico” is Ms. Chopra, a Bollywood superstar and former Miss World who is immediately charismatic and commanding amid the otherwise generic ensemble” , Variety called her an “arresting lead”.

The Gazette said, “…easily the most fascinating character is Alex, played by Priyanka Chopra. Chances are you’ve seen Chopra through the countless series of “Quantico” ads ABC has been running for the last few months. But, you’re more than likely to have never seen her in anything before that. “Quantico” marks Chopra’s U.S. television debut. After winning the Miss India and Miss World pageants in 2000, Chopra went into acting and became one of Bollywood’s most accomplished actresses. ABC has put a lot of faith in her and its well founded. Alex is a smart, sexy and clever character and Chopra plays her like a true vet. She’s a breakout star.”

With more than 400 original scripted series in production, breaking out is no easy feat .But as the TV industry heads into its busiest season, Hollywood Reported listed Priyanka Chopra as one of the top 10 hottest television stars to watch out for.

The ABC network is banking on Priyanka’s global appeal ,prepping a massive marketing push for the premiere and trotting Chopra out on stage at its upfront presentation for advertisers alongside fellow female leading stars Ellen Pompeo (Grey’s Anatomy) and Kerry Washington (Scandal) , speaking volumes for the confidence they have in the star.