Priyanka Chopra the only actress to be invited by IIM Ahmadabad. 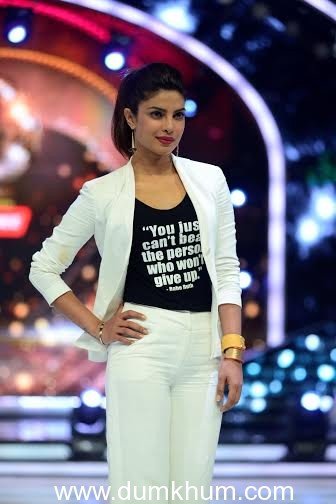 Someone truly looked upon as a “SHERO”, Priyanka Chopra who will next be seen in and as “Mary Kom” was invited by the management of the prestigious IIM Ahmadabad to address the students at the public business school.
Very few know that the only other star invited by IIM Ahmadabad , was superstar Mr.Amitabh Bachchan , who visited the establishment as part of a panel discussion.During her interaction with the young minds at the Indian Institute of Management (IIM)-Ahmedabad, Priyanka spoke about her upcoming film Mary Kom and the need to weed out gender bias from Bollywood.

Addressing the students at IIM Ahmadabad said Priyanka, “Things will change for women in Hindi film industry the day when we go and watch a movie after seeing its trailer, without having any gender bias in our minds,”