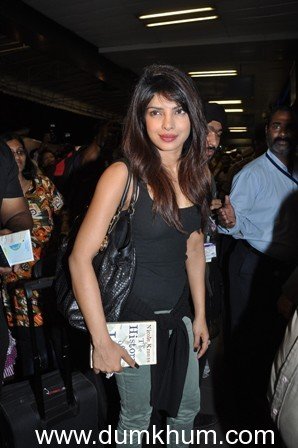 Priyanka Chopra known to go all out to get under the skin of her characters , is learning Manipuri for the Mary Kom biopic ,last schedule of which will go on floors early next year.
Apart from training in boxing to portray the Olympic medalist,Priyanka is spending a considerate amount of time studying the language ,a local dialect that Mary Kom has grown up with.While shooting for the film,the actress would also keep taped conversations of the boxer handy to gauge the finer nuances of her accent and improvise on the same.
Confirming the news says director Omung Kumar who readies for the film’s next schedule , “We recorded Mary when she was talking Manipuri .Even when she talks in Hindi she has a very sing-song way of speaking and she emphasizes on certain words.The tapes helped Priyanka practice the dialect.“
All praise for the actress he adds, “Manipuri is not an easy language to understand ,its not like the other languages we are used to hearing in films and Priyanka’s dedication towards learning it is amazing.We had to play with the words in a manner that makes them understandable to the audience without them actually knowing the meaning.”