Speaking at the inauguration of the swanky Terminal 2 (T2) of the Chhatrapati Shivaji
International Airport in Mumbai, Dr Manmohan Singh underlined government’s commitment for infrastructure development through progressive policies and effectiveregulatory regimes.

“Infrastructure deficit in the country is considered as a serious constraint limiting our rapid economic growth. And, therefore, we need to work doubly hard to bridge this deficit” observed the Prime Minister. “The Government alone cannot make the very large investment required to build world-class infrastructure in the country, and, therefore, we have been encouraging partnerships with the private sector” he added. Dr Manmohan Singh said, the Government has introduced several policy and regulatory reform measures to encourage growth, private participation and investment in the sector. “The decision to allow up to 49% FDI by foreign carriers in domestic airlines, in addition to the FDI permissible in airport infrastructure, will help Indian carriers through equity infusion” said PM. He added that the government is committed to improve airport infrastructure through private participation in Greenfield airports and Public Private Partnership in select airports currently being operated by the Airports Authority of India (AAI). There are plans to develop and operationalize 50 more airports across the country, in Tier-2 and Tier-3 cities. 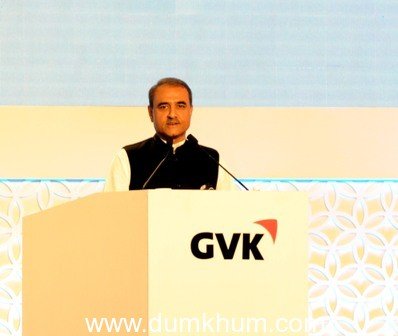 Dr Manmohan Singh said the construction of the new terminal is yet another example of successful execution of large infrastructure projects under the Public Private Partnership (PPP) model which the government has been encouraging. “The success of Terminal-2 should give a boost to other PPP projects in the country, which are underimplementation or at the planning stage” Dr Singh added.

Dr Manmohan Singh expressed happiness at the success of PPP model particularly in the civil aviation sector. 5 PPP airports in the county now handle about 57% of the passenger traffic and about 70% of the cargo.

Prime Minister said there is immense scope for expansion of the civil aviation sector in the country “Compared internationally, the propensity for air travel is currently very low in India. Our figure for domestic air trips per person is only about 0.05 per year, compared to 1.8 for USA, 0.25 for Brazil and 0.15 for China. There is, therefore, tremendous potential for growth of the civil aviation sector in the country” he observed.
PM congratulated MIAL for building a state of the art facility overcoming serious challenges and constraints. “This terminal is expected to establish new global bench-marks of functional efficiency and operational safety for airports. It also exemplifies our ability as a nation to build world-class infrastructure” he remarked Dr Singh said, Mumbai being the finacial capital and the entertainment capital of India deserves better infrastructure and underlined the government’s resolve to working towards making Chhatrapati Shivaji airport a world class facility.

Prime Minister also said that all pending issues with regard to the Navi Mumbai Airport have now been resolved and the Government of Maharashtra, in collaboration with the Central Government, is now moving ahead on the work for this airport Union Civil Aviation Minister Mr Ajit Singh in his address said “airports have truly become hub of large human activity. They give the best first impression to the arriving passengers. And keeping this in mind, a number of airports across the country have been modernized with the state-of-the-art facilities”.

While Delhi, Bangalore and Hyderabad got swanky new airports or terminal buildings over the last four years, the erstwhile aviation hub of India and country’s commercial capital Mumbai had to make do with cramped domestic terminals at Vile Parle and International terminal at Sahar. Lack of facilities in Mumbai and inauguration of a large new terminal (T3) helped Indira Gandhi International Airport, Delhi march over Mumbai as country’s largest aviation hub.

A decision to build a new terminal was taken in 2007, and the blue print was prepared by New York based Skidmore, Owings & Merrill LLP (SOM), designers of Dubai’s Burj Khalifa, the tallest building in the world. To give an Indian feel to the terminal, the white peacock theme was adopted.

T2 is a state-of-the-art four-level integrated passenger terminal with an area of over 439,000 sq metres, (approx 45 lakh sqft) which is larger than London Heathrow’s Terminal 5 or Singapore’s Changi airport terminal, but smaller than IGI Airport, Delhi or Incheon airport, Seoul, adjudged the best airport in the world.Vertical layout of the terminal is in tune with the space constraint faced by the Mumbai airport, which operates from 1500 acres area in comparison to sprawling IGI airport which stands on 5,100 acres, Rajiv Gandhi airport at Hyderabad, 5,400 acres and Kempe Gowda Airport at Bangalore that spans 4000 acres.

The USP of the Mumbai’s new airport terminal is the art wall named ‘Jaya He’. In the departure area itself, artefacts occupy 80,000 sq ft and curve along the contours of the terminal building. The displays include delicately-carved doorways, decorative torans, terracotta horses, lamps, wooden temple chariots, masks, bows of snake boats, mythical creatures, etc.

Mumbai International Airport Ltd (MIAL) is a public-private joint venture between the Airports Authority of India and the GVK led consortium. It is the second largest airport in India in terms of passenger traffic (30.2 million) and largest in terms of cargo handling (6.35 lakh tonnes) .