The Prime Minister, Mr Narendra Modi, today expressed confidence that India will undergo a renewal through the combined efforts of 125 crore Indians. Speaking at the inauguration of the H.N. Reliance Foundation Hospital and Research Centre in Mumbai, he said, “ just as this 90 year old hospital has undergone kayakalp (renewal), India too, can undergo a kayakalp, in the health sector”. The Prime Minister expressed concern over India’s health indicators such as infant mortality and maternal mortality rates. He said even if one child fell in a borewell, the entire country was worried, but we need to generate more awareness about the hundreds of children who are unable to survive due to lack of primary healthcare facilities. He said society and government should together give priority to the poorest of poor and make whatever efforts we can to  provide affordable health services. He said the Reliance Foundation Hospital was a step in that direction. 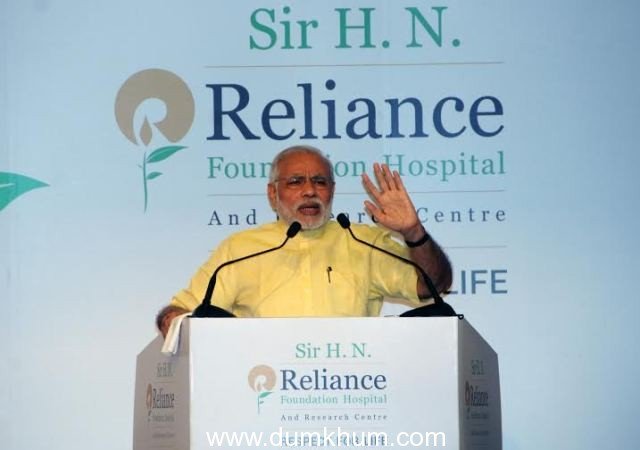 Domestic  production of medical equipment will go a long way in reducing healthcare cost
The Prime Minister said medical equipment was gaining increasing importance in the field of healthcare, and the need of the hour is for India to manufacture such equipment, as part of the ‘Make in India’ programme, so that it becomes available to the poorest of people even in remote corners of India. Referring to the Digital India programme of the Union Government, he said one of the primary aims of this programme is to ensure advanced healthcare in remote areas through telemedicine, and access to the best education for poor. The Prime Minister spoke of his suggestion at the United Nations for an International Yoga Day. He said holistic healthcare was a subject of interest across the world, and India could contribute a lot to this cause, through its rich heritage. He said India had a heritage where people desired the good of everyone. “A true leader works with the intention of wiping the tears of the poor,” the Prime Minister said, reciting two shlokas. Smt. Kokilaben Ambani presented a memento to the Prime Minister. The Chairperson of Reliance Foundation Smt. Nita Ambani in her welcome address, talked about the facilities available in the hospital.   She said, the hospital has drawn up an ambitious outreach programme benefitting over 3 lakh people.  She also informed that 50 doctors of Indian origin from USA, UK, Australia and other developed countries have returned to India to serve the nation. About the hospital :
Sir Harkissondas Narottamdas hospital  was founded in 1925 as Mumbai’s first general hospital.  The hospital celebrated its silver jubilee with Sardar Vallabhbhai Patel as its chief guest and the Golden Jubilee celebrations were graced by Jayaprakash Narayan.  During pre-independence period, it treated many freedom fighters, including  the Father of Nation,  Mahatma Gandhi,
In 1997, the Reliance Foundation joined hands with the hospital, which has since undergone major renovation and expansion to become one of the most modern hospitals in South Mumbai.  The heritage building of the hospital has been refurbished, while a new 19 floor structure,  with  state-of-the-art  medical equipments  has been added.  The hospital is also equipped with robotic surgery and on-line video conferencing for global consultations.  The hospital plans to reserve a fifth of its capacity for the underprivileged and provide 10 per cent beds for free to the needy and another 10 per cent at subsidised rates.