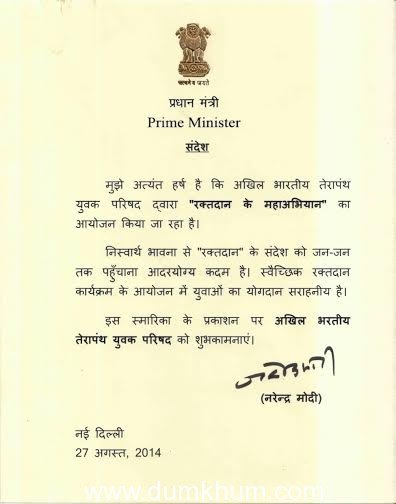 Akhil Bhartiya Terapanth Yuvak Parishad is going all the way to promote its Mega Blood Donation Drive in India. The Mega Blood Donation Drive is scheduled to be held on September 6th, 2014 in all over India. The cause which primarily encourages youth to come forward to donate blood has been acknowledged by our country’s proud possession Prime Minister Narendra Modi and soulful singer Lata Mangeshkar.

Both The Prime Minster and singer were so impressed with ABTYP’s blood donation campaign that they wrote them a congratulatory letter. In their letter they spoke about the importance of voluntary blood donation and impact of youth for this drive in their letter. 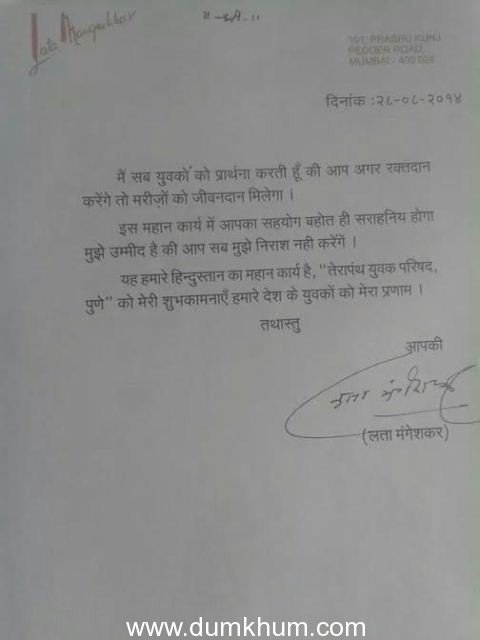 Lata Mangeshkar said, “I would like to congratulate Terapanth Yuvak Parishad Pune for initiating such campaign on large scale.” The celebrated singer also said, “I request to all the youth of our nation to come forward and be a part of this noble cause by donating blood.”

The initiative is spearheaded by actor and philanthropist Vivek Oberoi who has been associated with Cancer Patient Aid Association, Project Devi,Banyan,Project Hope and Akhil Bhartiya Terapanth Yuvak Parishad (ABTYP), an organization with a nationwide reach of 325 active branches and over 35,000 members  across the globe. The drive is also supported by Oberoi Nation Building & Empowerment (ONE).