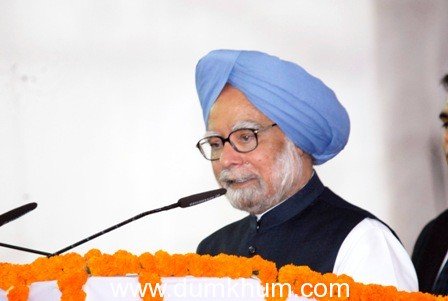 The Prime Minister Dr. Manmohan Singh laid the foundation stone for the National Hadron Beam Facility and a Cancer Centre for Women & Children, of the Tata Memorial Hospital in Mumbai today. Speaking on the occasion the Prime Minister said the Rs.425 crore facility will be funded entirely by Government of India through the department of Atomic Energy and will be completed in less than 4 years. lauding the commitment of Tata Memorial Centre in bringing cancer treatment within the reach of thepoorest, the Prime Minister said, the Hadron Beam facility will cater to nearly 1500 people every year. He also said the government has made fighting and preventing cancer a top priority in the National Health sector and this was the third cancer treatment facility for which he was laying the foundation stone in less than two weeks. Speaking on the occasion the Maharashtra Chief Minister Prithviraj Chavan, outlined the various health schemes being implemented by the government and said his government had made available the 5 acres to establish the National Hadron Beam Facility and other centres to Tata Memorial Centre at no cost.

The Chairman of Atomic Energy Dr. R.K. Sinha said with the Hadron Beam facility India will join a select group of nations in the world with this advanced treatment of cancer.

The Prime Minster also released the new logo of the Department of Atomic Energy in its Diamond Jubilee year.

Hadron Beam Facility is part of the Radiation Therapy for cancer treatment. Whereas in conventional Radiational therapy, x-rays consisting of high-energy photons are used to destroy tumours which also affect normal tissue, Hadron beam therapy using irradiated beams made of charged particles of protons and other ions such as carbon penetrates the body with little diffusion are destroy the cancerous tissue in a more focussed manner , thus causing minimum healthy tissue damage. Hadron therapy enhances the quality of life during and after cancer treatment.