President Mukherjee calls upon the Indian Chemical industry to invest in green technologies ; National Chemical Policy in the offing. 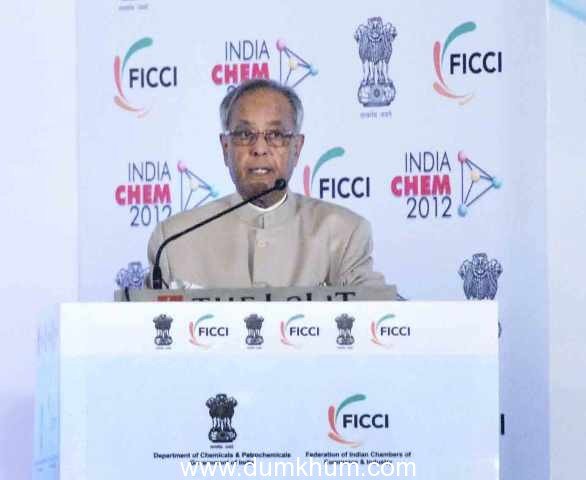 President Pranab Mukherjee today called upon the Indian chemical industry to promote sustainable development by investing in green technologies. Speaking in Mumbai, after inaugurating the INDIA CHEM 2012, Mr Mukherjee said the industry must ensure increased adherence to safety and international health and environmental standards. “Indian chemical industry would need to set targets and standards and take up research and collaborations without delay” he added.

The President further said, the chemical and petrochemical industry has a very important role to play in increasing the share of manufacturing from the present level of 16 % to 25 %, as per the National Manufacturing Policy. He said, the National Chemical Policy is currently under preparation and will include measures to facilitate this.

With Asia’s share in the global chemical industry increasing from 31% to 45%, India has emerged as one of the focus destinations for chemical companies worldwide. The indian chemical industry, currently valued at $ 108 billion accounts for only 3% share of the global market. “This is a very good reason for the policy makers and the industry to take the lead and prepare a road map” said Mr Pranab Mukherjee. The President also called upon the industry to increase its spend on Research & Development from the current level of 1-2 per cent to 5-6% of the annual turnover.

INDIA CHEM 2O12 has brought together policy makers, chemical industry leaders from India and abroad to debate and deliberate the issues concerning future of chemical and petrochemical industry. It is organized jointly by the Department of Chemicals and Petrochemicals, Government of India and FICCI. The three day International Conference will also focus on clean coal technologies, opportunities in PCPIR regions, growth and investment ipportunities in upstream and down stream petrochemicals. Japan is the partner country at INDIA CHEM 2012, while Gujarat, Andhra Pradesh and Odisha (Orissa) are the partner states. This was Shri Pranab Mukherjee’s maiden visit to Mumbai after becoming the President of India. Ends.