Well Know Marathi Actress & Anchor Manava Naik  is all set to present the audience her new directorial venture. After perusing her film making course from New York in 2011 her biggest interest started from her first feature film “DOPHERI” which won awards like the Best Film award at Nashik Film Festival and Manava got the award for The Best Director at Sangli Film Festival and for the Best Emerging Filmmaker at Kashish Queer Film Festival, Mumbai, in 2013. Event host “Pushkar Shrotri” presented the entire event with his well known sense of humour. The program took off by showing the first look of the film followed by the introduction of new kids on the block. Dharmaj Joshi was introduced by his father Manoj Joshi(Renowned Actor). The Introduction of all 5 new faces was the moment of pride & Nostalgia for their parents in presence of the Entire Cast & Crew ,Celebrities and Media presence. The Unveiling of the Poster was  done by Mr.Madhukar Pichad (NCP President) with other star cast of the film.

ARD entertainment’s Ashwini Darekar’s as a debutant producer said “I always wanted to get into films. With Por Bazaar I have contributed to Marathi cinema which is my mother tongue as a Producer.Today the dream has come true with all the support of my husband Ranjeet Darekar. She promised that we further wishe to make good and appealing movies for audience as she announced one more Marathi movie project to go on floor very shortly. 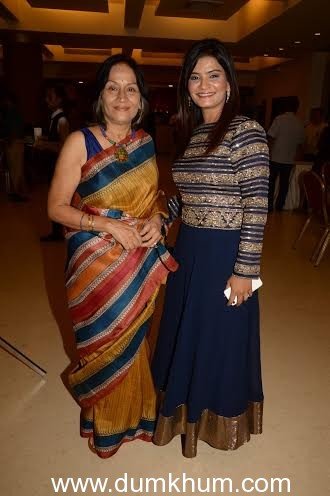 Por Bazaar is the story of five youngsters, namely Ajay, Manjiri, Samar, Vishal and Raghini, who often bunk lectures and go to cinema halls, parks and otherplaces for time pass.

On one such occasion when the 5 are hanging out, they encounter a weird house and few people in it. The movie then is the adventure of these inquisitive 5 who get intrigued by this house, the people there and eventually enter the house to reveal a truth.