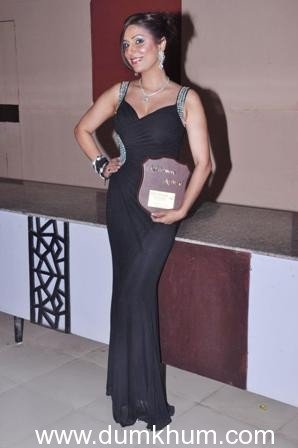 We caught up with Model/Vj/Actress Pooja Misrra looking sizzling hot in a  snug black gown, with a killer messy updo ! We quizzed her about who had styled her? Being the one man’s army that she is ,she confessed that the gown was from her clothing line ‘spare me’,and her look for the evening was put together by herself!
In an auditorium filled with the who’s who of Politics, Creme dele creme of Delhi , Pooja shone bright in a glamorous avatar. 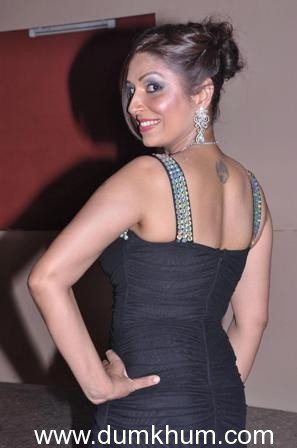 There was thunderous applause when she was awarded with ‘The Best Video Jockey’ award which we felt it was about time for! How can we forget Pooja in shows like ‘Jab We Talk’ on B4U Music, War of Dj’s on Sony tv,Indie Top 10 on channel 33 in Dubai, Big Switch on Bindaas, Big Boss on Colors,Glamorous on Zoom,almost all the shows on Zee Music with all the top Bollywood actors/directors/producers, Music Punch on Sab Tv, Public Kya Bola on Sony TV, BPL Oye on Channel V, Innumerable live shows all over the world!