Nikita Saxena and Neelam saxena Chandra’s poetry collection titled “Transcending Hearts” published by Authorspress India finds a place in the Limca Book of Records 2017. The book has revolved around “Sometimes the heart sees what is invisible to the eye. A good poetry doesn’t flow from the senses of touch. Those are basically observations. Emotions in a good poem spring from the heart and sometimes they even transcend heart and find their way out from the soul. Transcending Hearts is a collection of thirty poems each by two poets, Nikita Saxena and Neelam Saxena Chandra, who happen to be sisters. 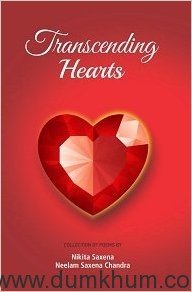 Nikita Saxena is basically a Prosthetist and Orthotist, working in Government Medical College and Hospital, Nagpur as a Biomechanical Engineer. In her free time, she likes to do photography and write about what she clicks. She believes that every momentous capture tells its own story and she is just a channel unfolding a verse in the unchained melodies. Her photographs have been collaborated earlier too with the poems of her sister Neelam Chandra in two of her books. This is the first time she is foraying into the world of writing poems.
Neelam Saxena Chandra, an author of twenty-four books, is a record holder with the Limca Book of Records for being the author with highest number of publications in a year in English and Hindi. She has won award in a poetry contest by American Embassy, Premchand Award by Ministry of Railways, Rabindranath Tagore international poetry award, Freedom award by Radio city for her lyrics. She was listed in the Forbes list as one of the most popular seventy eight authors in the country in 2015.