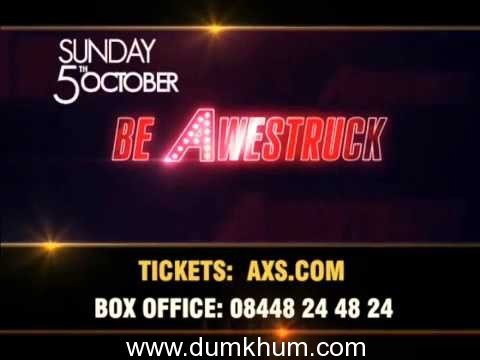 Shah Rukh Khan  I  Deepika Padukone  I  Madhuri Dixit I  Abhishek Bachchan  I   Malaika Arora amongst others!

Get ready for the ultimate Bollywood event of the century, Lycamobile SLAM+ The Tour, coming to The O2 London on Sunday 5th October 2014, where the King of Indian cinema, international megastar Shah Rukh Khan, will take to the London stage for the first time in over a decade.

Brought to audiences by entertainment impresario and leading Bollywood show organiser Farhath Hussain in association with live event promoter Think Events, Lycamobile SLAM+ The Tour is a one-night-only experience and the biggest concert extravaganza of its kind in Europe, with a sell-out audience of 15,000. The event will bring a total of 135 cast and crew from India and promises to be a night of wonder with a feast of big star names, riveting music and alluring dance sequences all interspersed with breathtaking visuals and impressive staging.

Joining silver screen royalty ‘King Khan’ will be a bevvy of Bollywood A-list actors, actresses, directors and choreographers, including the reigning queen of the Indian film industry Deepika Padukone along with Abhishek Bachchan, Sonu Sood, Boman Irani, director Farah Khan, and newcomer Vivaan Shah. As a special treat for the audience, Farhath Hussain and Think Events will exclusively bring to UK shores the legendary actress Madhuri Dixit, who will join the stellar line-up to SLAM her way into the hearts of her fans. Bollywood’s dance diva Malaika Arora along with singing sensation Kanika Kapoor will perform to the latest floor-fillers to set pulses racing. The show will be expertly choreographed by Geeta Kapoor (Dance India Dance).

Not since the frenzy that was stirred with the Temptations concert a decade ago in 2004,headlined by Shah Rukh Khan, has a live event again inspired such excitement and hype. The maestro behind the hugely successful Temptations concert in 2004 and now the spectacle that will be Lycamobile SLAM+ The Tour, is promoter extraordinaire Farhath Hussain.

Internationally recognised as the world’s premier promoter of Bollywood entertainment with no less than 500 star-studded shows to his name, he is the undisputed connoisseur responsible for bringing Bollywood to the forefront of mainstream audiences internationally and contributing to its global boom.

Speaking about the exciting new venture, he said: ‘I am thrilled to be bringing the global superstar of Indian cinema, Shah Rukh Khan, back to the UK with Lycamobile SLAM+ The Tour. After Temptations 2004, this will be a very nostalgic experience. Lycamobile SLAM+ The Tour will be truly magical and mesmerising, like nothing ever seen before on this scale.

The line-up of mega stars, including Madhuri Dixit, Deepika Padukone, Abhishek Bachchan and Malika Arora, will be a dream experience for fans.”

Speaking about Lycamobile SLAM+ The Tour and his return to the UK stage, Shah Rukh Khan said:  ‘I am blessed to get a lot of love and support from people around the world. This is our way of giving this love back and thanking you all. I am super excited and looking forward to being in your city along with my colleagues Farah, Deepika, Madhuri, Malaika, Abhishek, Boman, Sonu, Vivaan and Kanika. We promise you an evening of love, laughter and entertainment. So mark your calendar and be there at Lycamobile SLAM+ The Tour .’