As the invite of Chandrakant Singh’s production house launch event says ‘Expect the unexpected’ the guest and media came for the party last night at Cinemax were truly stunned speechless when they saw the preview of C K Arts first produced short film ‘Scapegoat’. Rightly said ‘Scapegoat’ subject is one of its kind, bold, controversial and coming first time on the screen. Subject dealt with animal abuse and, an unnatural sexual act with goat, never ever touched by any filmmaker. Hemant Pandey who knows for his best comedy performance in TV serial ‘Office Office’ and film ‘Krish’ had attempted this bold step, and successfully performed the main culprit sexually frustrated sick mentality guy who overpowered  the goat and committed unnatural sexual assault on the goat. Everybody present there who saw his praising his outstanding bold performance and predicting to won many statues from International festival circuits. 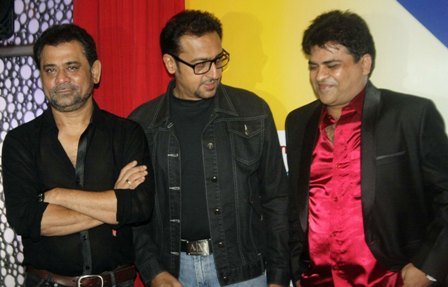 Film subjects has so many controversial angle but Producer Chandrakant Singh says ‘this is a realistic thought that create another controversy rather I says its start of a new debate’. Chandrakant says ‘there are  bunch of good quality- oriented, intellectual short films made, which many times we the audience tend to sideline them but for my first production baby I will make sure and will try to market ‘Scapegoat’ the best.’

‘Scapegoat’ director Ajit Sinha who has written the subject said ‘ it’s not a fictional thought, past two decades have witnessed cases of animal abuse, and an unnatural sexual act cases all over the World. In Scapegoat the goat which we have shown is representing entire animal species. Cruelty to animals, or animal abuse, and serious violent behavior against them should be stop and we condemned this act’.