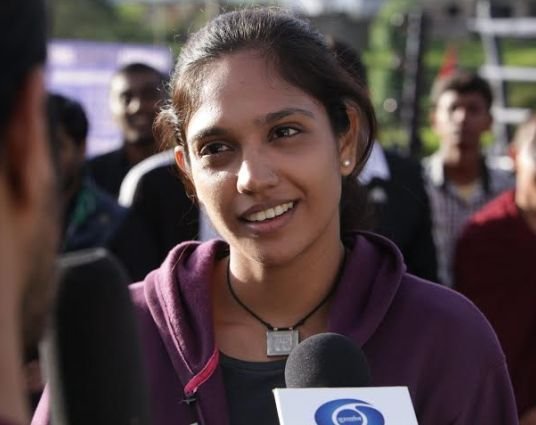 The renowned magician, Prodip Chandra Sorcar’s daughter,  Mumtaz Sorcar to debut in Rajkumar Hirani’s second production,  Saala Khadoos. Saala Khadoos is the story of a rustic fisherwoman,  played by Ritika Singh who Mahadhanvan’s character, a retired  boxing coach,  groom’s into a match winning boxer. After auditioning over 100 girls,  Rajkumar Hirani found the perfect fit for the role,  Ritika Singh from the boxing ring.

Rajkumar Hirani has casted a real life boxer, instead of an actress. Mumtaz who is the grand daughter of Pratul Sorcar is playing the role of the Ritika Singh’s sister in the movie.Mumtaz Sorcar started learning boxing in school as a kid. She fell in love with boxing as she considers boxing as a true magical sport. Mumtaz learned her boxing techniques at Sports Association of India, Kolkatta.

Her boxing connection has got her first Bollywood debut with renowned producer, Raj Kumar Hirani and director, Sudha Kongara.Rajkumar Hirani was very keen on casting real life boxer’s as the body language of a boxer is very different. The content oriented sports drama, Saala Khadoos will see R.Madhavan in the lead role. Madhavan who’s imagery is known to be of a chocolate boy, will be seen playing a Saala Khadoos in his awaited next.
The actor’s transformation of a boxer is much talked about. Interestingly, the female lead of movie, Ritika Singh who plays the boxer in the movie, is also a boxer in real life as well like Mumtaz. Rajkumar Hirani confirms and adds, “I love magic and was delighted to meet PC sorcars daughter. The first thing I asked her when I met her was – teach me a few magic tricks. And she did. “
Saala Khadoos is all set to release on 29th January, 2016.