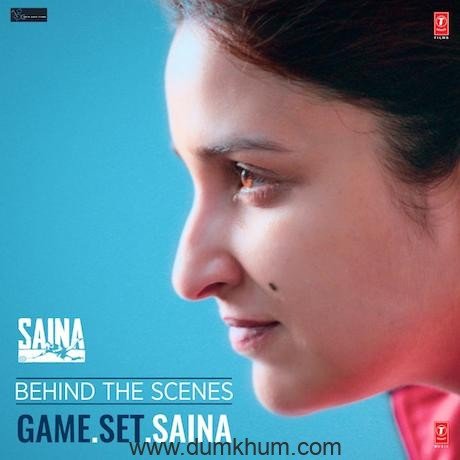 Challenges make you or Break You – Watch Parineeti Chopra’s intense journey as she becomes ‘Saina’!
Stepping into Saina Nehwal’s shoes was no easy feat for Parineeti Chopra, who stars in and as ‘Saina’. The film traces the journey of the ace Indian badminton champion Saina Nehwal, who with her never-give-up spirit inspired billions across the globe.
While the film has received massive support from the industry and the Indian and international sports fraternity, the journey was intense and required major prep to get into mind and physicality of being an athlete.
Serious skills go behind the making of an Olympian and no one understood that better than Parineeti, who spent months training for agility, performance and speed.
In her attempt to not just ‘act’ like Saina but ‘become’ Saina, Parineeti underwent a gruelling training, which came along with its fair share of breakdowns on court and extreme fatigue – However,  she pushed her way through, inspired by the thought that every proud Indian will be watching this film that pays homage to the badminton legend.
Says Parineeti Chopra, “Badminton is the fastest racket sport in the world. You need some serious skills to play an Olympian and I realized that on my very first day on court. There have been days I’ve cried on court, there have been times I’ve said ‘I can’t do this’ but then my mind flashes with the image of the millions of people who are going to watch this and that would make me get up”.
Take a look into the challenging journey and how #Saina made herself who she is today – https://www.youtube.com/watch?v=WEOBnKEz_RA
Saina produced by T-Series’ Bhushan Kumar & Krishan Kumar & Front Foot Pictures’ Sujay Jairaj & Rasesh Shah releases on 26th March 2021.