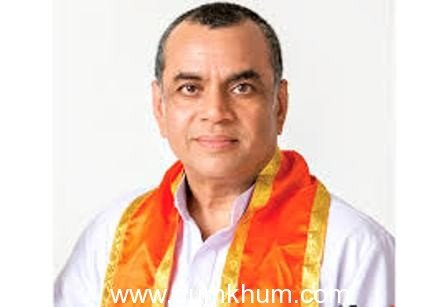 Neel Bhakt Paresh Rawal, the man who has had Indian audiences in splits every time he’s seen on screen is back to lead the stellar star cast in upcoming film Dharam Sankat Mein. After the phenomenal success of OMG – Oh My God, this satirical comedy with Naseeruddin Shah and Annu Kapoor will see Dharampal being forced to follow the hilarious Neelanand Baba and his quirky Neel eccentricities.

Naseeruddin Shah’s uber cool look of Neelanand Baba was finalized after rejecting 60 other looks. In fact, Naseer himself took personal interest in accessorizing this look from choosing the right shade of blue for his Neel glares to riding the 1760 cc blue sports bike. He even went into minute detailing with the length of the choti that he chose to sport as part of his hairstyle, so that he could then play with it.

Taking a leaf from this new Baba’s book and his ‘Neel’ eccentricities, the makers have launched a whole new “Neel Dharam”. On social media, there are links to Neel Satsang, excerpts from the Neel Granth, a video that demonstrates the Neel Pranam and a funky Neel Anthem featuring Sophie Choudry and Hazel Keech as Neel Bhakts. Moreover, the Neel volunteers around the city will be seen on their Neel Vahaans in Neel Robes, evangelizing the Neel Dharam.