Paresh Rawal goes the edgy way for Table No.21

Guaranteed to send chills down your spine ,Paresh Rawal is set to shock audiences with his all-new look in the forthcoming thriller Table No.21 produced by NextGen Films and presented by Eros International –

After several look tests ,the high-concept thriller , sees the powerhouse performer don an edgy look ,reminiscent of some of his path-breaking roles essayed in the past – And while details of his role in the film are tightly being kept under wraps ,the makers confirm that it is indeed one of his career’s finest.

Confirms producer Viki Rajani “ We wanted Pareshji to have a new avatar for Table no.21 and he was more than willing to experiment and go those two steps further. After several looks tests we settled on this one and it worked splendidly in support of his character,taking it notches higher”.

Presented by Eros International and produced by NextGen Films, Aditya Dutt ‘s Table no.21 starring Rajeev Khandelwal,Tena Desae and Paresh Rawal , recently went on floors with the first schedule being shot at the picturesque Fiji Islands. 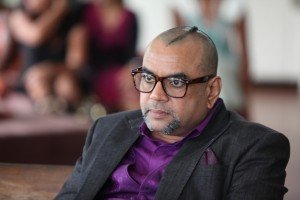