India Psychedelic The story of a Rocking Generation By Sidharth Bhatia New Delhi,  Oxford Bookstore Connaught Place celebrated Sidharth Bhatia’s book, ‘India Pyschedelic, The story of a Rocking Generation’ on February 27, 2014. The author was in conversation with eminent journalist, Sreenivasan Jain. The book brings to its audience, the never-before-told story of the rock music scene in India of the 1960s and ’70s.

India in the 1960s and early 1970s: a nation of perennial shortages. Into the staid and conservative landscape come floating in the sounds of ‘Love, love me do’. Four young boys from Liverpool in 1962 set off a storm that swept teenagers in every remote corner of the world. In socialistic India, too, youngsters put on their dancing shoes to groove to this new sound, so different from anything they had heard till then. Some grew their hair, put on their bell-bottoms and picked up their guitars and the Indian pop and rock revolution was born. But it was not just the music that was important.

As Sidharth Bhatia’s colourful and incisive book tells us, it was an attempt by a new, post-independence generation – midnight’s children – to assert their own voice. Theirs was a voyage of self-discovery, as they set out to seek freedom and liberation from older attitudes and values. At the end of this era, nothing – politics, society and fashion – would ever be the same again. 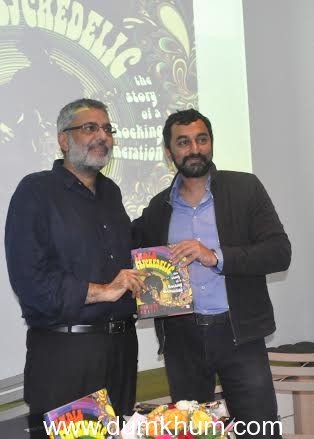 Oxford Bookstore Connaught Place offers a carefully curated list of titles for booklovers to browse through and buy and perhaps the world’s largest assortment of teas in the hip Cha Bar, to create a holistic experience for book lovers. The entrance leading to the bookstore houses a big Neon Wall, a cloud of words in English-Hindi-Latin that envelopes book lovers in a universe of emotions linked to reading. Inside, in the tranquil space, hands-on staff, knowledgeable and highly trained book specialists, offer suggestions of handpicked titles from major, independent and indie publishers: a great selection of books, some exclusive to Oxford Bookstore. The selection features both emerging and established authors from India and the world. Shelves stocked with the best in Indian Writing, International Fiction and Translations take one into a spacious, elongated Reading Room which opens onto a dedicated Events Space. Well-researched sections on Languages and New Age books address issues of addiction, relationships, unexplained phenomena, and showcase the best of thinkers and Indian gurus. A wide range of titles in Travel Writing, books that showcase the very essence of New Delhi and a specially curated section of books on tea are other highlights. Children have an exclusive space for browsing, activities and reading and parents can look forward to the Top 10 Gift Books in each age group for a quick and easy pick. Amongst the best in books for different age groups are ones that help the young ones deal with experiences relevant to their age. Sidharth Bhatia has been a journalist for over thirty-five years, working both in India and abroad. He is a regular commentator in newspapers and on television, on current affairs, society and culture. He is the author of Cinema Modern: The Navketan Story (2011) and Amar Akbar Anthony: Masala, Madness and Manmohan Desai (2013), both published by Harper Collins India.