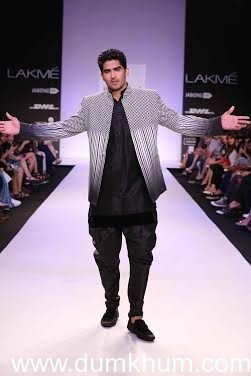 When asked about the integration Vijender stated “I love to try out different things and after establishing myself in Boxing, I forayed into acting with my upcoming film Fugly and now I am set to walk the ramp with my JAT style for Archana Kochar which makes it a perfect blend. She is a wonderful designer and hence not only I but also Mohit, Kiara & Arfi are delighted to attend her show at Lakme Fashion Week. We hope to entertain all our viewers and hope they will enjoy the film as much as I enjoyed walking the ramp.” The Collection “Paris Amour” mirrors imagery drawn from the romantic city of Paris which resonates with energy and love for fashion. Inspired by the “pop-art Paris map”, the iconic “Eiffel Tower” and the twines of colorful spring flowers creating beauty of juxtapose using monochromatic stripes and checks in digital prints. The flow of the line is in the stream of intriguing silhouettes with an indo-western resort twist. In its entirety the whole show radiated a lively youthful flair and each garment seemed to have been crafted intricately to its form. As the collection was synonymous with youth, Archana left no stone unturned to ensure she got the right element to complete her collection by getting the young, vibrant and newcomer  cast of ‘Fugly’ on board amidst much fanfare. Archana quoted,” A smile can lighten your day in every way…my association with The Smile Foundation and the FUGLY cast is a refreshing and energizing experience as the cast are high – spirited young debutants with exuberant talent”

Fugly is a coming-of-age drama directed by Kabir Sadanand. It is the story of four friends: Dev (Mohit Marwah), Devi (Kiara Advani), Gaurav (Vijender Singh) and Aditya (Arfi Lamba) and how this carefree bunch, at the threshold of their lives, get caught in a ‘Fugly’ incident, which sucks them slowly into the big bad world of corruption, politics and the real society in the capital. The film also sees Jimmy Shergill return to the big screen after his stupendous performance in Bullet Raja.

The show also witnessed an integration of Archana Kochhar and the Smile Foundation. To lend their support the cast and attendees were all seen wearing customized badges towards ‘women empowerment’.