Scam 1992: The Harshad Mehta Story tops the chart with 14 nominations followed by Mirzapur, The Family Man, Grahan, with the most number of nominations across categories 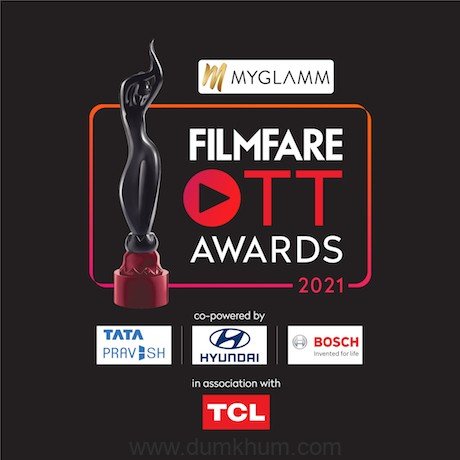 Filmfare, India’s leading entertainment platform, is all set to celebrate the artistic and technical brilliance of the OTT industry with the MyGlamm Filmfare OTT Awards 2021. The final nominations have been selected based on audience votes across genres like comedy, drama and non-fiction for both web series and web films. Filmfare will felicitate the best of talent and technique at an exclusive event in Mumbai on December 9, 2021.

While Hansal Mehta’s Scam 1992: The Harshad Mehta Story bagged a whopping 14 nominations across categories, fans of Mirzapur and The Family Man ensured that the second season of both thrillers earned 13 and 12 nominations, respectively. The awards promise to be a close contest as stellar actors such as Manoj Bajpayee, Pratik Gandhi, Pankaj Tripathi, Samantha, Shreya Dhanwanthary, Shweta Tripathy are in the race to win the Best Actor (male and female, respectively) in the Web Original series category. Similarly, seasoned actors like Naseerudin Shah, Nawazuddin Siddiqui, Manav Kaul, Ratna Pathak Shah, Kajol and Konkona Sen Sharma are nominated to win Best Actor (male and female, respectively) in the Web Original Film category. Manoj Bajpayee is also the only actor to have bagged a nomination in both, the film and series categories. For the complete list of nominations please, click here.

Deepak Lamba, CEO, Worldwide Media said, “Filmfare Awards have become synonymous with excellence in creativity and talent over the last six decades. The emergence of digital platforms has given way to diverse and experimental storytelling for the evolved audience. With lesser restraints of the conventional mediums, actors too are able to explore and take their craft to higher levels. Filmfare OTT Awards are a celebration of this transformation.”

Jitesh Pillaai, Editor, Filmfare said, “I’d like to thank the audience for being part of the process so diligently, your contribution is unmatched. The last year has seen some breathtaking stories and performances, with each one outshining the other. We’ve also seen such an exciting crop of young talent, the future of Indian entertainment is truly bright. It’s going to be a really close fight.”

Darpan Sanghvi – Group Founder & CEO, Good Glamm Group added, “We at MyGlamm are super excited to partner with Filmfare on this exciting recognition of talent in the OTT space. What makes this even more special is that the fans are able to vote and choose the winners. This is what we believe in at MyGlamm, which is, we connect with our consumers digitally, listen to their needs and then make products based on those needs. It’s been a privilege to partner with Filmfare for this edition of the MyGlamm Filmfare OTT Awards and look forward to celebrating the artistes, their talent and their content that has struck a chord with the audiences.”

Actor Manoj Bajpayee added, “The last couple of years have been the most interesting times of my journey and most of the credit goes to my recent OTT stints. This industry is truly transforming and I laud Filmfare for creating a special intervention to celebrate the best of creative excellence in the OTT space.”

The awards ceremony will take place in Mumbai, ensuring public safety and in alignment with COVID-19 guidelines issued by the Government.

For over six decades, Filmfare has been the ultimate destination of Bollywood for die-hard fans by extending the rich legacy of the brand into a multiple formats, avenues and experiences. The brand also is known to keep the film-buffs updated with exclusive interviews, classy photo shoots, insider stories, sneak peeks, fashion coverage, movie reviews and special features. Filmfare captures Bollywood’s biggest stars at their colourful, candid, beautiful, quirky best. Filmfare Awards, its biggest flagship property, recognizes the best talent in Indian cinema. Since its inception in 1953, it has been a benchmark of merit in the industry. While the legacy of Bollywood and South film industry edition continue, this prestigious ceremony also has successful regional extensions across Marathi, Punjabi and Bengali cinema. Last year, Filmfare also ventured into the Indian OTT entertainment space, thus making the iconic ‘Black Lady’ the most sought-after symbol of recognition across the entertainment industry in India.

MyGlamm is India’s fastest growing direct-to-consumer beauty company. MyGlamm embraces the philosophy of building a community with its users, engaging with them and eventually creating products with them. With over 800 SKUs across makeup, skincare and personal care, MyGlamm beauty products feature advanced rich, feel-good formulas that are cruelty-free, embrace a philosophy of clean beauty, and have skin-friendly ingredients. MyGlamm uses a combination of technology, content and social media to allow consumers to not only discover its products but also create a rich, personalized, content and tutorial fueled post-purchase experience through its App.