Network18, one of the biggest media conglomerates in the country, unveiled a one-of-its-kind initiative to honour cricketing icon Sachin Tendulkar today – ‘Bat of Honour’. This historic tribute was unveiled in the presence of the legendary batsman himself along with Mr. Rajdeep Sardesai, Editor-in-Chief, IBN Network.

The monument has been installed on the Carter Road Promenade, a stone throw away from the legend’s residence. The Bat of Honour is designed by some of the best engineers and designers in the country. In order to make it as timeless and iconic as Sachin, the ‘magic wand’ has been sculpted in a scale to capture the true weight of his bat which connected millions of hearts across India with each shot. 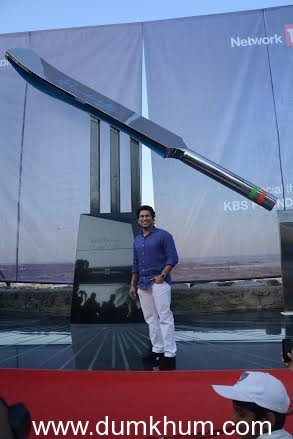 Speaking on the occasion Rajdeep Sardesai, Editor-in-chief, IBN Network said “Sachin has inspired an entire generation of Indians with his play. With this permanent installation we hope he continues to inspire many more generations. This initiative is consistent with Network18’s endeavour to go beyond being just a media brand, but also an organisation that strives to encourage young India to reach their true potential.”

Mr. Baba Siddique one of Bandra’s eminent residents added “If greatness is measured by how many lives you’ve touched and how many people you’ve given joy, Sachin is unquestionably one of the greatest sportsmen ever. As one of Bandra’s tallest citizens, we the people of Bandra are delighted to have a structure which best epitomises Sachin’s glorious career.”

The is, by far, the largest steel ‘bat’ in the world, reaching a height of over 25 feet, weighing over two tonnes with over 5000 man-hours of labour put into it. But numbers don’t tell the whole story. The Bat of Honour is an engineering marvel and an aesthetic delight: It has a streak of blue which is symbolic of his main source of energy- the India blue colour which inspired him throughout his career. The bat’s tough and timeless material- stainless steel- symbolises his flawless cricketing career while the Indian flag on the handle celebrates the pride for playing for his country. The handle also has his face etched at its end, so that people can see him in their reflection, and be inspired. 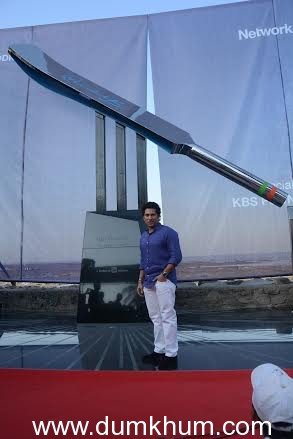 The Bat of Honour is placed with its base facing the sky so that people can interact with its handle, imagining what it is like to hold Sachin’s bat. The monument also blends in well with the environment- people may see the setting sun as a ball on the bat in the evening. The lighting is designed to make it look hung in space at night, creating a god-like illusion. The entire structure is placed at an angle that can withstand cyclonic winds- an important pre-requisite given that it’s on the western coastline. If that’s not all, the little master’s farewell speech, which signifies his emotional connect to life, is etched on a plaque below the installation.

The entire initiative has been ideated and executed by Network18 in association with Mr. Baba Siddique and the support of KBS Foundation.