NETFLIX DROPS THE TRAILERS OF ITS UPCOMING SERIES ‘FEELS LIKE ISHQ’ 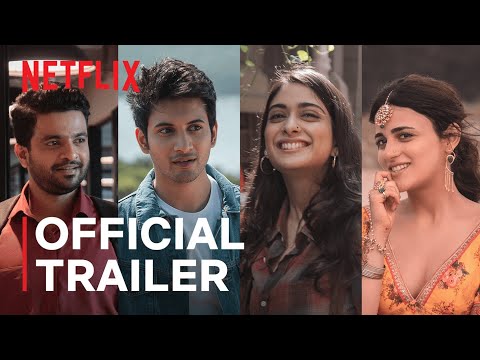 What’s the craziest love story you’ve heard? Love happens to most of us, unplanned and unexpected, but gives us a special someone to cherish for a lifetime. Love on the run. On a guitar strum. At a protest. With a house guest. Cupid strikes in unexpected ways as captured in Netflix’s upcoming series – Feels like Ishq – an anthology of six stories about the kindling of young love which will make you go AWWW. The anthology brings together stories of people from different walks of life and takes them on a heart-warming journey of love. Directed by Ruchir Arun, Tahira Kashyap Khurrana, Anand Tiwari, Danish Aslam, Jaydeep Sarkar, Sachin Kundalkar and Devrath Sagar, in collaboration with Mutant Films and Awesomeness TV, the series is set to hit the service on 23rd July, 2021.

Talking about his story, ‘Save The Da(y)te’, Director Ruchir Arun said, “Love can happen anywhere, anytime in today’s day and age. Save The Da(y)te is one such story where two completely opposite individuals bump into each other at a wedding and spend ample amounts of time together, just to realise there might be something more. Both Radhika Madan and Amol Parashar are energetic and entertaining  performers which helped us in bringing this relatable story to life”

Giving her take on love through this beautifully curated story, ‘Quaranteen Crush’, Director Tahira Kashyap Khurrana said,“Quaranteen Crush is a subtle love story that blooms while the world is experiencing a global pandemic. It is a simple story that speaks volumes about care, innocence and friendship. Kajol Chugh and Mihir Ahuja essay the roles of Nimmi and Maninder with ease, and their camaraderie ensures that the audience’s mood stays light”

Talking about his experience of working on ‘Star Host’, Director Anand Tiwari said, “Star Host is a simple story about the serendipity of the universe that can bring two complete strangers together and creates wonders in unexpected ways. We tried to bring in the elements of scenic views and nature to weave a story around our protagonists Aditya and Tara played by Rohit Saraf and Simran Jehani. Both have brought these characters to life with amazing performances that will make the audience remember what Ishq feels like.”

Shedding light on his episode, ‘She Loves Me, She Loves Me Not’, Director Danish Aslam said, “This was one of those stories that pretty much wrote itself once the characters were fleshed out. And Saba & Sanjeeta looked like they’d strolled straight out of the pages into the frame. They’re both equal parts mad and poignant, which is pretty much what love is most of the time”

Talking about his experience of working on ‘The Interview’, Director Sachin Kundalkar said, “Feels Like Ishq  brings together six engaging and relatable love stories. The Interview is one of the unique stories and it blends different emotions of confidence, respect, understanding, care and eventually the spark of a strong bonding between two people. Neeraj Madhav and Zayn Khan have a great screen presence together and their simplicity of characters makes the story so endearing. I can’t wait for audiences to witness their camaraderie”

Looking back at his experience of shooting for ‘Ishq Mastana’, Director Jaydeep Sarkar said, “Collaborating with Tanya Maniktala and Skand Thakur was an absolutely joyful experience. Both of them brought great authenticity and phenomenal chemistry to the story. ‘Ishq Mastana’ is about two young people who chance upon a tender love, in an otherwise frenzied world. When you hold your lover’s hand in a chaotic crowd and for that one moment, everything about the world feels just right. It’s that love!”

Feels Like Ishq is set to premiere exclusively on 23rd July, 2021, only on Netflix

Netflix is the world’s leading streaming entertainment service with 208 million paid memberships in over 190 countries enjoying TV series, documentaries and feature films across a wide variety of genres and languages. Members can watch as much as they want, anytime, anywhere, on any internet-connected screen. Members can play, pause and resume watching, all without commercials or commitments.