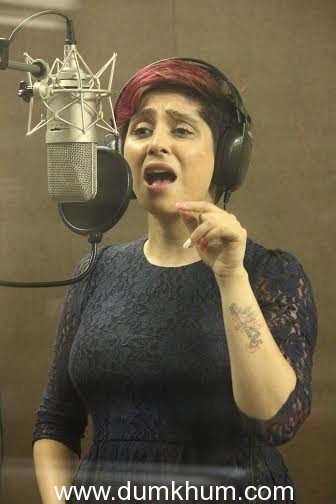 Neha Bhasin is a India Singer , Song writer ,Dancer, Model , Tv hostess and was a member of Indian pop girl group “VIVA” . After giving her melodious voice in Hindi, Telegu , & Tamil films. Neha for the first time sings for a Marathi film ” DIL BOLE KUDUKU” Directed by Kshitij Zarapkar & Produced by Mrinal Kapadia.Lyrics is by Ashwini Shende & Rishikesh Kamerkar ​ who has scored the music says Neha has added up a lot of attitude & positive vibes in the song as she is signing a club number for us in this film . Neha says I’m living for last 10 years in Mumbai and had a wish to sing a Marathi number since long time because this language has its own uniqueness.Finally my wish got fulfilled as my friend & Music Director of our film “

Rishikesh Kamerkar” gave me an opportunity to sing this Marathi Track. This track will surely turn out to be a foot tapping dance number for all youngster out their.