The largest 3-on-3 college basketball and youth festival ever held in India, NBA Jam powered by Jabong.com, traveled to Mumbai today to the popular destination centre, High Street Phoenix.  Mumbai is the fifteenth of 16 cities which the event will travel to with over 3,000 teams participating across the country.  The National Basketball Association (NBA) and SONY SIX have partnered to bring the event back to India for the second consecutive year. Actress Neetu Chandraa, a basketball and NBA Fan, was seen engaging youth in Mumbai to grow the sport and drive participation in NBA Jam.  In addition, the Sacramento Kings Dance Team travelled to Mumbai from the U.S. and entertained fans with several high-energy dance performances.

The traveling interactive basketball festival is focused on growing and eliciting participation in basketball across India by combining exciting on-court competition with interactive games and contests designed to engage college youth and grow the NBA’s fan base.  More than 600 colleges across India will be engaged in order to drive awareness and generate registration for NBA Jam powered by Jabong.com.  NBA talent, including a legend, dance team and mascot, will travel to select cities to engage fans. “NBA Jam powered by Jabong.com will be bigger than ever this year, and we look forward to bringing the NBA experience to college students and youth in these 16 cities,” said Yannick Colaco, Managing Director, NBA India. “From the largest ever 3-on-3 tournament ever held in India to shooting and graffiti competitions, I know sports fans across India will be excited to participate.”

Commenting on this initiative, Mr. Praveen Sinha, Founder and MD, Jabong.com said, “Following our association with the NBA that started earlier this year, we have seen a great response from our customers who are fashion and sports-oriented.  We are yet again elated to join the NBA for these events, which again give us an opportunity to showcase how Jabong is contributing to the basketball enthusiasts in the country and increasing awareness of the sport.  We extend our full support to the NBA’s initiative.” Mr. Prasana Krishnan, Business Head, SONY SIX said, “We take immense pride in partnering with the NBA in bringing the second season of NBA JAM to India. Last year we went to 4 cities with this remarkable format and caught the imagination of many Indian sports enthusiasts. It is this overwhelming response, which propelled us to return this year taking this cultural extravaganza to 16 cities. With a remarkable format, NBA Jam will not only boost basketball participation in the country, but also strengthen the footprint of sports and drive viewership for NBA programs available exclusively on SONY SIX.” The 3-on-3 national tournament, part of NBA 3X events conducted in 14 countries and 52 cities this year, will include divisions for both men and women ages 16-24. All the 15 outstation teams i.e 1 boys and 1 girls from each city will be invited to Pune for a bigger and grander National Finals. 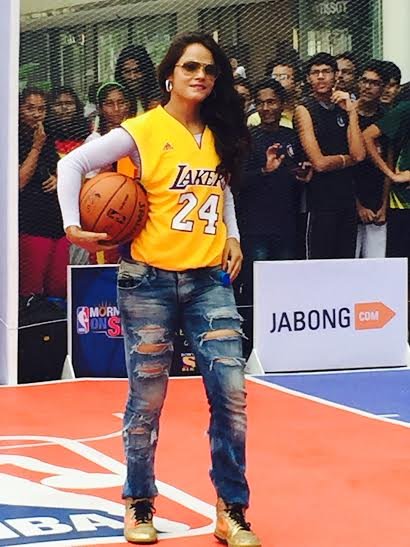 Jabong.com is the new powered by partner for NBA Jam, powering the online event registration and microsite: www.Jabong.com/nbajam.  Jabong.com will create an NBAStore.in experience zone at each NBA Jam venue that will feature the latest NBA merchandise and exciting games to engage youth.

Sprite, the official beverage partner of NBA Jam, will provide students with the opportunity to be a part of its digital activation: Sprite Till I Die.  Young graffiti artists will have the chance to take part in the Sprite Graffiti Challenge and win exciting prizes.  The artists will have the option to upload their work on www.spritetillidie.com to take part in Sprite Till I Die Art.

Adidas, the official outfitter of NBA Jam, will provide players with jerseys for the 3-on-3 tournament.  In addition, adidas will bring back the “adidas Hoopstars” shooting competition to find the best shooter in each city, who will earn the latest, cutting edge adidas basketball gear.

NBA Jam powered by Jabong.com will feature a variety of exciting contests to engage students:

Jabong.com NBA College Ambassador program – Jabong and the NBA are looking for the biggest NBA fan in each city.  Fans in each city can register to be a part of the contest by posting an image of themselves on the NBA India Facebook page and Twitter using the #JabongNBAicon hashtag.  Participants that generate the most “likes” and “retweets” will win in their respective city.  Winners from each city will receive exclusive NBA merchandise and be entered into a national competition to find India’s biggest NBA ambassador.

Jabong.com Internship Challenge – Jabong will provide one talented student with the opportunity to intern at the company’s headquarters in Gurgoan.  To qualify, participants in each city can submit an application on Jabong.com.  The 16 city winners will interview with Jabong’s senior management, after which one winner will receive a three-month internship.

Head-to-head dance and war of the DJ competitions will take place at each venue, allowing students to showcase their skills.

SONY SIX, the NBA’s broadcast partner in India, aired a record 14 games per week during the 2013-14 season, up from four the previous season.  More than 50 million viewers tuned into NBA programs during the season, with an average per game viewership increase of 300 percent year over year.

Jabong.com, India’s leading sports and fashion destination, and the NBA’s e-commerce partner in India, receives more than 30 million unique visitors per months and delivers to more than 400 cities, towns and villages.  NBAStore.in has the most comprehensive product assortment ever available to fans in India.

The NBA is a global sports and media business built around three professional sports leagues: the National Basketball Association, the Women’s National Basketball Association, and the NBA Development League.  The league has established a major international presence with offices in 13 markets worldwide, games and programming in 215 countries and territories in 47 languages, and NBA merchandise for sale in more than 125,000 stores in 100 countries on 6 continents.  NBA rosters at the start of the 2013-14 season featured a record 92 international players from 39 countries and territories.  NBA Digital’s assets include NBA TV, which is available in 60 million U.S. homes, and NBA.com, which recorded 26.9 billion page views during the 2013-14 season, with more than half of all visitors originating from outside of North America.  The NBA is the No. 1 professional sports league on social media, with more than 675 million likes and followers globally across all league, team, and player platforms.  Through NBA Cares, the league and its teams and players have donated more than $237 million to charity, completed more than 3 million hours of hands-on community service, and created more than 895 places where kids and families can live, learn, or play.