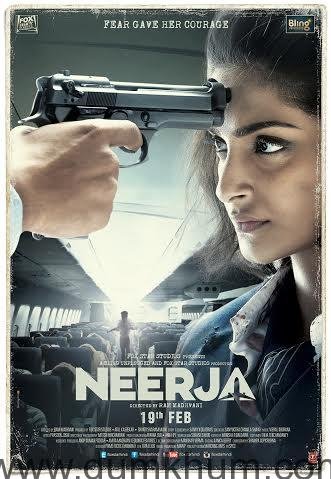 Fox star studio’s Neerja has released its new poster today, and it depicts the Hero that Neerja Bhanot was.
The poster features a courageous Sonam Kapoor at gun point thereby paying a tribute to the braveheart Neerja Bhanot. Set against the backdrop of a chaos strucken aircraft hijacked by terrorist, the poster exhibits dreadful moments from the fateful incident.
Neerja Bhanot became India’s youngest  recipient of India’s highest peacetime military award for bravery, the Ashok Chakra as she sacrificed her life while saving passengers from terrorists on board the hijacked Pan Am Flight 73 on 5 September 1986.
A biopic on her tale of bravery is Directed by Ram Madhvani and Produced by Fox Star Studio’s and Bling Unplugged features Sonam Kapoor playing the titular role. The film is all set to release on February 19th, 2016.