Details of the songs

1.welcoming love;   represents romance, invocation welcoming the beloved ,the happiness of the sweet pain to be loved by some one special whom you like

2..devotion to the almighty; showing the extreme devotion to god ,the different ways a person loves god the surrendering to the super power & thanking for all his gifts & creations.

3. worship of beauty;  ,the mood is ornamentation of a beautiful girl sitting in front of mirror & beautifying  herself etc. as such to impress her beloved

4. the deepest pain;  ,the pain & urge to be get love but there is no response but just a sympathy, show the storms moving throughout mind & body

5. Awaiting  that moment ;this is a piece based on the king of raagas ‘yaman’ with romance it has the seducing fragrance of a lustrous pleasurable evening with the lover

6. the royal touch;  shows the patience generosity ,bravery & feeling of a leader who serves his empire Territory  ,the atmosphere is like of an ancient gowning palace in night (AKBAR’S DARBAR ETC 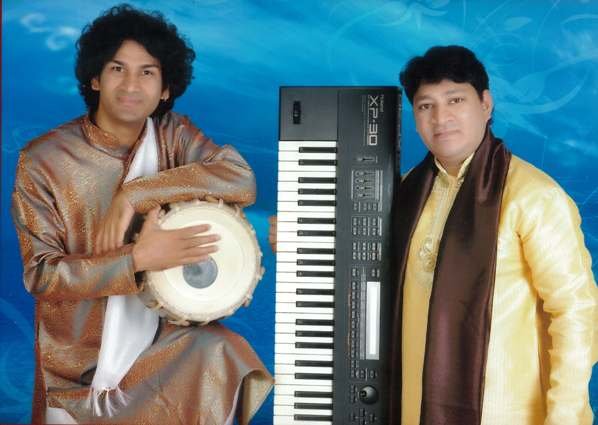 :Naviin Gandharv is a young multi – talented musician who plays the unique instrument  called as ‘Belabaharr’ & the Tabla with equal passion & dexterity with his own distinct style which is a typical blend of the traditional & creative music developed from his mentors legendary Ustad Allarakha & Pt. Babulal Gandharv (the creator of the ’ Belabaharr’).His association with great maestros has polished him to be a dynamic & versatile performer .

It is said that melody & rhythm is a rare & uncommon combination. Like his name he is truly a ‘Gandharv ‘.Born on 20 Dec 1977 in the heart of Dewas ,a famous place in Madhya Pradesh ,India  where music is cherished since generations being born in the aristocratic family of  Pt.Kashiram a celebrated Sarangi Master.He did  intial training in tabla from his Nanaji Pt.Mansingh, Pt.Vishwanath Mishra & later grasped the fragrance of Punjab gharana  from tabla wizard Ustad Allarakha .Impressed by his talent Ustad Ghulam Ali & Pt Brij Narayan shared with him some priced tabla secrets & intricacies of taal mathematics

Naviin’s  band ‘ANURAAJ’, is a product of his efficiency in Belabaharr & Tabla which is the only one of its kind which produces music different from all contemporaries, His songs are  blended by the nuances of ragas & interesting taal mathematics which is India’s traditional heritage presented in a noble style

Apart from his solo concerts Naviin with his band including elder brother Devanand Gandharv who is a gifted composer, arranger, keyboardist create wonderful extempore  soothing  &  roohani & folk music which cuts across cultural boundaries & appeals to people of all classes & backgrounds. The aesthetics which is a specialty of Naviin’s music goes beyond technicalities producing immense pleasure which can’t be achieved by mere hard practice

In fact the legendary artists like Pt.Hariprasad chaurasia,Pt Ram narayan,Anup Jalota ,Ghulam Ali & many others blessed him that he is going to turn out into an exiting & promising artist of the future generation & prove to be an asset to music world The Belabaharr is a unique instrument that combines the tonal effect of a Sarangi with the convenience of a Violin. It is not commercially available as a musical instrument, although it is approved by AIR and Doordarshan. Its commercial rendezvous is restricted to a few pieces in the popular bollywood hits like 1942 A Love Story, Gadar,Damini, LOC Kargil, Refugee etc.The Belabaharr has been a substitute to most varieties of bowing instrument like Dilruba, Tar-shehnai, Ravanhatta, Violin, Sarangi etc.”

Details of the construction of Belabaharr 1.Tradionaly Indian instrument from the Sarangi family& its principles with the easy technique of Violin

2.No operation or modification of any other instrument as has always been done in the case of Harmonium ,Guitar or sitar. Belabaharr has its own individuality of appearance & tone

3.A block of 200yrs old Burma teak wood is carved same as in sarod or sarangi .Same with the use of skin & it’s a one piece instrument not like Violin which is a joint of plywood .The solid wood gives a roundness ,fullness & deep sound suitable for Indian music especially

5.Under the bridge there is a special leather belt strip which keeps the balance & bears the heavy tension of all the strings

6.Fine tuners are attached at the upper part which enable the artist to tune the instrument instantly in not more than couple of minutes where as it almost takes 15 to 20 mts in other Indian tarab instruments

7..Except the metal part like strings each & every thing is made by Pt.Babulal Gandharv without the use of any artisan or carpenter

8.It is a versatile instrument which has been almost used in most forms of music such as classical ,folk ,devotional, film music ,contemporary or world music