Namit Das recalls his favourite memory of ‘A Suitable Boy’ 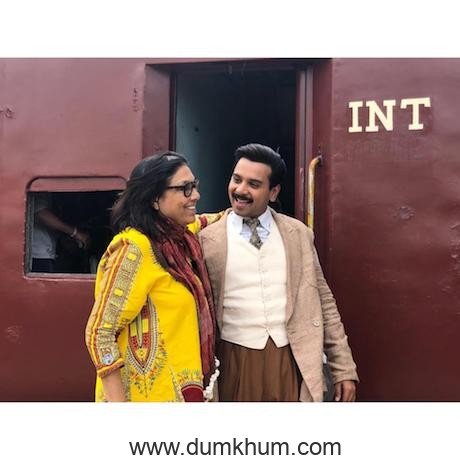 Awaiting the announcement of exciting projects, Namit Das fondly remembers shooting the last scene of Mira Nair’s adaptation of ‘A Suitable Boy’. The versatile actor cited it as his dream venture and was a stellar series to his credit. He has been an ardent admirer of the filmmaker and cherished the entire process of shooting for the series. He took to his social media to express his nostalgia.
Das posted a picture of him and Mira and clicked at the end of the last scene. In the caption space, he wrote, “Lata: You should go.
Haresh: Never….”
This is from the last scene on the railway platform in “A suitable boy”. This image of me and Mira was taken by Aradhna right after we finished filming the scene. Each time i go back to this my heart wishes to stop time and never let that train go. Frozen in time and existing in love forever.
Miss you Mira. We shall meet soon and this time i will never let you go.
2nd April,2021, Lucknow,Uttar Pradesh”
He was seen in the role of a shoe entrepreneur, Haresh Khanna who is hoping to win the hand of a literature student, Lata for marriage. The actor spared no effort in the course of his prep for the role of a shoemaker. For the sake of authenticity, he learnt the entire process of shoemaking right from cutting the leather to fixing the sole of a shoe. On the work front, he awaits the release of Aafat-E-Ishq.