Music Launch of a Marathi film Online Binline under the banner of Ganraj Associates took place at a suburban nightspot. Today when we see so many marathi films being launched day in day out this particular film stands out as far as the subject of film is concerned .  The whole film revolves around today’s young generation who are totally engrossed into the world of internet and social media taking a toll on them and their time. This was amply evident from the fact that the main lead cast present took the stage and anchored the whole show making it a very lively and enjoyable affair. Sidharth Chandekar and Hemant Dhome saw to it that every aspect of the music launch was presented and represented by the cast and crew and the music segment of the film. The highlight of the film is a very peppy rap number crooned by none other than Hariharan and Leslie Lewis who lend a very strong base to the essence of the film and its story line. Producer Shreyas Jadhav was in full form as he talked about how he planned the film and went on to do a rap item with the guidance and persistence of Leslie Lewis who was present for the music launch to lent his support. 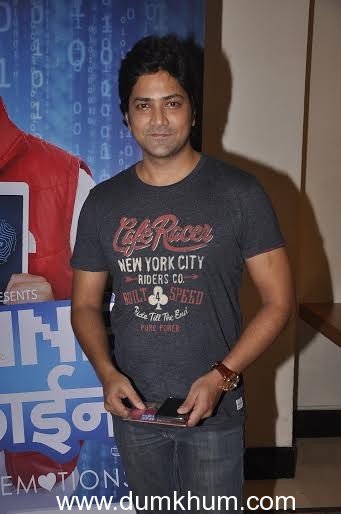 Aniket vishwasrao , Suyash Tilak and quite a few Marathi film celebs were spotted. Trailer of the films highlight songs were shown to the whole cast and crew , guests and members from the Press & Media. The music was launched with great fanfare and Celebrations which followed , everyone one present had a great time.