Amish Tripathi, the bestselling author of the Shiva Trilogy, Festival Director, Anil Dharker, Dr. Mukund Rajan, Brand Custodian and Chief Ethics Officer of Tata Sons, and Khushroo Suntook, Chairman, NCPA, unveiled the brochure of the festival, at a press briefing today, heralding the start of the four-day long literary extravaganza. The shortlist for the Tata Literature Live! First Book Award, an award instituted to honor promising talent in the field of literature, was announced today. This year, the award will be given for two categories: Fiction & Non-Fiction.

In the fiction category, the shortlisted authors are Chetan Raj Shrestha, a 34 year old architect from Sikkim, Gangtok, for his book, ‘The King’s Harvest’; Shovan Chowdhury, a Delhi-based amateur humorist, for ‘The Competent Authority; and Srikumar Sen, ex-journalist from The Times for ‘The Skinning Tree’.

Non-fiction category shortlist comprises  Ananya Vajpeyi, a senior fellow with the American Institute of Indian Studies, for her book, ‘Righteous Republic’; Saba Naqvi, political editor of Outlook magazine, for ‘In Good Faith’; and Peter Smetacek, an authority on Indian butterflies and moths, for ‘Butterflies on the roof of the world’. An interesting event to watch out for is an exhibition of unique cricket memorabilia by Boria
Majumdar that will coincide with Sachin Tendulkar’s participation in his career’s 200th and last Test match.

To observe the centenary of the Nobel Prize to Rabindranath Tagore, the festival will proudly launch Harvard professor Sugata Bose’s new translation of Gitanjali. Psychoanalyst Sudhir Kakar’s book, Young Tagore, will also be released on the occasion.

In keeping with the festival’s tradition, there will be a special honour for outstanding contribution to the Indian literary scene. This year’s recipient, Khushwant Singh, will be felicitated with the Landmark Literature Live! Lifetime Achievement Award. In light of his accomplishments, Khushwant Singh was a natural choice for the award this year. 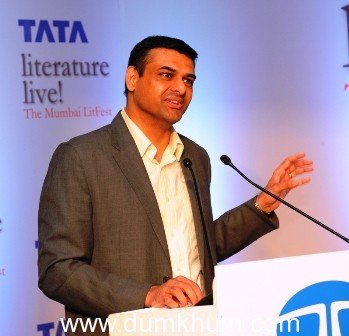 Speaking on the occasion, Dr. Mukund Rajan said, “The Tata group is delighted to present the
Tata Literature Live! The Mumbai LitFest 2013 – a platform that offers India’s literature enthusiasts an opportunity to experience diverse literature from across the globe. The festival has a fabulous line-up of writers, thinkers and artists who will stimulate intellectual dialogue through debates, panel discussions and performances.

The Tata group has been a patron of art and culture from its inception and Tata Literature Live! The Mumbai LitFest is a manifestation of the same heritage. Through this initiative, the group endeavours to promote the cause of Literature and give a boost to the literary culture in the country across all age groups, especially among the younger generation. In the festival, platforms like Tata Literature Live! First Book Award have been developed to discover and encourage new talent thus pushing the boundaries of creativity. We wish the shortlisted candidates the very best of luck.”

Anil Dharker says: “Tata Literature Live! The Mumbai LitFest, is not only Mumbai`s own international literary festival, it is now recognised internationally as one of our country`s very best litfests. As always it will feature literature in all its forms, presented by the liveliest minds, with engaging interaction between audiences and participants. The line-up is exciting; entry is free, so anyone who loves words and ideas should block these four days.” Amish Tripathi said, “Exchanging ideas and perspectives with fellow authors, writers, readers and
artists from around the world is an inimitable experience indeed. To prospects of interacting with
fellow literary enthusiasts at a platform like the Tata Literature Live! The Mumbai LitFest is exciting. I am really looking forward to this and will be happy to be a part of it.” 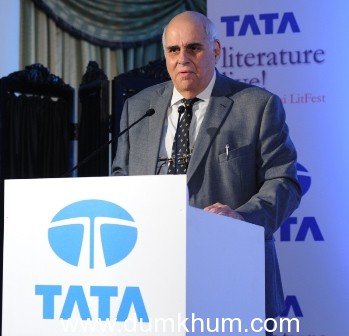 Khushroo Suntook mentioned, “The NCPA continues to be happy to be associated with Tata
Literature Live, which has now become a part of Mumbai’s cultural calendar. It is also delighted to make its spaces available to the many intellectually stimulating discussions that emanate from these meetings. This year, once again a fine array of writers and thinkers will participate and I am sure that Mumbaikars are in for stimulating four days.”

Among the performances will be: Martin Kiszko’s ‘More Green Poems for a Blue Planet’; Alyque
Padamsee’s ‘Arthur Miller: An Actor’s Godsend’ and Antigone’s ‘A Stage Reading’. Naseeruddin
Shah will present extracts from Sadat Hasan Manto’s stories. Among the plays will be a play for National Children’s Day, Mr. Jeejeeboy and the Birds; the sensation from the Edinburgh
Festival, The Price of Everything; the much acclaimed Holocaust love story from Britain, The Tin
Ring; The Killing of Dussasana, an incredible blend of Spanish Flamenco and Kathakali; the
Mumbai premiere of an acclaimed play from Chennai, How to Skin a Giraffe and a unique show
designed around music, literature and Sufi music provided by Ahmedabad’s renowned Deewana
group.

Tata Literature Live! The Mumbai LitFest will present for the first time an art and photography
exhibition which investigates the relationship between literature and art by inviting artists to create art works inspired by Khushwant Singh’s autobiography, Truth, Love and a Little Malice. On display will be paintings and photographs from illustrious artists like Amit Ambalal, Anjolie Ela Menon, Arpana Caur, Raghu Rai, Clare Arni, Desmond Lazaro, Gigi Scaria and many other eminent artists.

Tata Literature Live! has grown exponentially in terms of depth, quality and popularity on a year-on- year basis. It has become immensely popular in Mumbai because it looks at literature in a manner that complements the spirit of Mumbai: lively, energetic, free-wheeling and cosmopolitan.