After the resounding success ofprevious six seasons, the seventh season of the channel’s hugely popular flagship show, MTV Splitsvilla was launched with oodles of oomph in Mumbai.With the seventh season, MTV Splitsvilla is all set to raise the hotness meter even higher with MTV VJ Nikhil Chinapa and sensuous Sunny Leone hosting the show together. The show goes on air on 14th June 2014 and will be telecast every Saturday at 7 PM only on MTV. 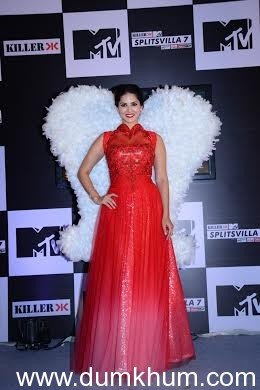 MTV Splitsvilla, the popular show that brews the perfect love potion will be seen in an all new avatar as this time around 20 hot girls will be seen wooing and vying for the attention of seven gorgeous male celebrities. This season, viewers will get to see the likes of Ayaz Ahmed, Abhishek Malik, Ashwini Kaul, Mayank Gandhi, Mayank Pawar, Rishabh Sinha and Shravan Reddy being fought over by stunning women that include former Ms. Goa and lingerie model Scarlet Rose among others at the romantic Samode Palace in the vicinity of Jaipur. The show will also see some never-before-seen twists and turns as temperatures soar and the drama intensifies! On the occasion of the launch Aditya Swamy, EVP and Business Head of MTV said, “MTV Splitsvilla has entertained around 50 mm young Indians across six seasons. While the highly controversial show has become an obsession with young people, we have built strong levers of engagement through our digital platforms which keeps the franchise alive 365 days. With a brand new format disrupter this year, we are looking forward to taking this twisted game of love to an altogether new level.”

Vikas Gupta, Programming Head of MTV India, said “MTV Splitsvilla is a show that supports young love. This summer we’re taking the contestants to a hot new destination that will add a new flavour to the show.  We have given the format a twist, with 7 male celebrities and 20 girls in the exquisite surroundings of Samode Palace in Jaipur which should be the perfect place for love to blossom. Moreover, roping in Sunny with Nikhil is bound to accentuate the glam factor of the show.”

Speaking about her association with MTV Splitsvilla, Sunny Leone said, “With the show all set to launch, I’m more excited than ever. Having watched MTV Splitsvilla in the past, it’s a great experience to now be a part of it. I’m really happy to be associating with MTV once again, this time to be the host ofMTV Splitsvilla and I look forward to a great time and hope that this season the contestants find true loveas that would be the real win.”

With all thetantalizing anticipation built up till now, no one can wait any longerforwhat is promising to be the best season of MTV Splitsvilla yet. Cupid strikes on 14th June 2014 at 7 PM only on MTV!