Mrs. India Dubai International successfully got three beautiful women crowned on 19th February at Le Meridian, Dubai. It was a beauty contest unique in the world of pageantry, a family-oriented competition, designed to promote today’s married women, their accomplishments, and commitment to the family and their marriage. Produced by Carnival Media the show also provided an opportunity to showcase the contestants their fashion style, as well as offered them the chance to share their values during the week of activities leading up to the event. 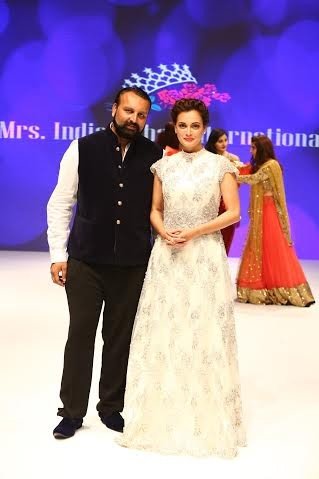 The Mrs. International series began 24 years ago, in Atlanta, Georgia, US. It was developed under higher standards than other pageant systems, with the aim to showcase women aged 21 to 56 years, who are married at least six months and a resident of the state or a citizen of the country they represent. The contest is separated into three rounds. The first is the Interview Competition, which contributes 50% of the contestant’s overall score. Next is the Evening Gown round, valued at 25%, in which candidates are accompanied by their husbands. The remaining 25% is attributed to a Fitness Wear contest. Each contestant has the opportunity to select a cause of her choice that she has spent the year promoting. In keeping with the family spirit of the pageant, the winner got crowned by her husband. The winners of Mrs India Dubai internal 2016,  2nd Runner up Shweta Domingo , 1st Runner up Priya Jethani and Mrs India Dubai International 2016 winner Is Priyanka Mehrotra . The winners were extremely honoured and appreciative for receiving the significant award which boosts their confidence and inspiration to realize their dreams and the chance to become Mrs India Dubai International 2016. Since it was an family oriented talent show, their kids too were overwhelmed seeing their mommys at the stage. “The Mrs India International series is about empowering married women and giving them a platform to promote the things they care about – everything from the family to health and fashion,” – Gagan Sharma, Director (Carnival Group).

Carnival Media is a part of a diversified corporate group and is a Mumbai based company. With a strong financial backing and a well established corporate structure, Carnival Media is one of the fastest growing companies in media and entertainment. They create, develop and produce media properties in live events as well as manage shows and concerts both in India as well as Overseas. Their body of work has been diverse across verticals like, International Concerts, Reality Shows, Gala Award Nights, Movies Premier’s, Music Launches, Wedding Planning, Product Launches, Corporate Seminars and Trainings, Educational Workshops as well as various Promotional and Entertainment Events in India & Overseas. They have a diversified presence which includes Food Courts, Cinema Multiplex’s, Movie Productions, Equipment Rentals as well as a Music Label.