Little did Mithun Da know that his movies would bring Ukrainian Supermodel give up on her acting career & move to Mumbai! Nataliya Kozhenova, Mithun da’s ardent lover recalls watching Jagir 14 times making her mind to try her luck in Bollywood & finally getting to meet Mithun Chakraborty. 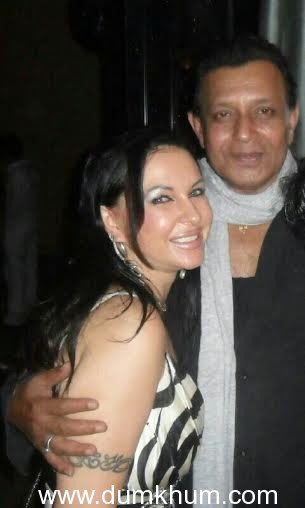 It has been five years; Italian-Ukrainian supermodel Nataliya Kozhenova, a Bollywood fanatic, left behind her successful modeling career & landed in Mumbai to chase her dream & got her first break by Jackie Shroff & in her recent encounter with Mithun Chakraborty, Nataliya expressed her love for him & how he was her driving force to move to Mumbai. Nataliya exclaims, “I couldn’t believe he was right there in front of me, when my dear friend Mimoh introduced me to him. I spoke at length with him about my favorite Mithun movies & he told me how nostalgic he was reminiscing his old times. He is a great human & if I ever get to work with him in near future, I would be living a dream…literally! The day I met him is going to be the best day of my life for years to come. I’m not a fan…I love him…I adore him & I’m glad I could meet him.” She took the risk & chased her dream. Nataliya Kozhenova of Ukrainian origin still remembers the first time she saw Jagir starring Mithun Chakraborty, Zeenat Aman & that’s when she knew where she belonged to.

Self confessed Bollywood fanatic, Nataliya apparently fancied Bollywood films to such an extent that she saw Jagir 14 times in the theatre & became an ardent lover Mithun Da & had the urge to meet him. The Ukrainian supermodel had such an impact of Bollywood on her that she started dressing up like the Indian actresses & dreamt everyday of shifting her base to the city of dreams but it is easier said than done. Nataliya couldn’t have asked for more when her friends gifted her ticket to Mumbai & for someone who had no knowledge about India & the language let alone be people was a matter of quiet concern for her folks. Then began her networking & making contacts on social network & the first day when she landed here, Nataliya had already made friends to count on & then came her first break with Jackie Shroff for an ad commercial shot in Kolkata.