RT. HON. CHIEF MINISTER VASUNDHARA RAJE APPLAUDS AKSHAY KUMAR FOR HIS EFFORTS IN TAKING ON TABOO SUBJECTS SUCH AS THE OPEN-DEFECATION CRISIS HEAD ON

Bollywood megastar Akshay Kumar, well known internationally for enabling passionate tailwind for notable social causes, extended his support for the Festival of Education, a first of its kind event in South Asia, incepted by the Government of Rajasthan in partnership with GEMS Education, to celebrate the future of education in India. An unprecedented event, the festival saw over 1,00,000 global innovators, academicians, faculty, change-makers, vice chancellors, educationalists, teachers, students, parents, scientists, and policy makers under one roof, united by the same goal – to give shape to the future of education through discourse, discussion and debate. The Festival of Education entertained and inspired in equal measure and was divided into three experience zones which included Fundamental to capture high-level, thought-leadership panel discussions led by international stalwarts in the field of education and policy and game changers who play a fundamental role in shaping the future of the youth and in turn the future of India; Elemental, themed around Earth, Water, Wind, Fire and Aether to feature conversations by high-profile personalities from all walks of life, derived from these elements, to encapsulate a holistic learning; and Experimental, a special curated zone where governments exhibit technology that will drive the future of education. “I wanted to highlight how a ‘Toilet’ is crucial to India’s health & sanitation, our state of living, even in the 21st century. More importantly I wanted to highlight how this film and the issues we are spotlighting affects the majority of women in this country, the country that we call our Motherland, yet our mothers, wives and sisters quietly and shamefully have to live without toilets & in conditions that should be inexcusable especially in this day and age.”

He added: “Open defecation is a problem that affects all of India. It is not only an issue for villages but equally a problem for the cities. Cities are at greater risk as we live in a confined area. Open defecation near the sea, or in between railway tracks, means germs and disease are able to spread quickly in the cities as we are so close to each other in the concrete jungle.” During the panel discussion Akshay Kumar was praised by Right Honourable Chief Minister of Rajasthan, Ms Vasundhara Raje, for his revolutionary efforts to bring awareness to the taboo subjects such as the open-defecation crisis in India.

She said: “For the first time, somebody (in cinema) has bothered about issues close to women’s hearts. It is so very essential to living, and it is a subject that not many people would have touched. But Akshay has taken it, and he has taken it head on, so I need to congratulate him for this amazing job. I don’t think there is a single state today that isn’t fighting to make their states open defecation free. Rajasthan is one of them, and we are hoping that by 2018, we would be able to actually reach this.” 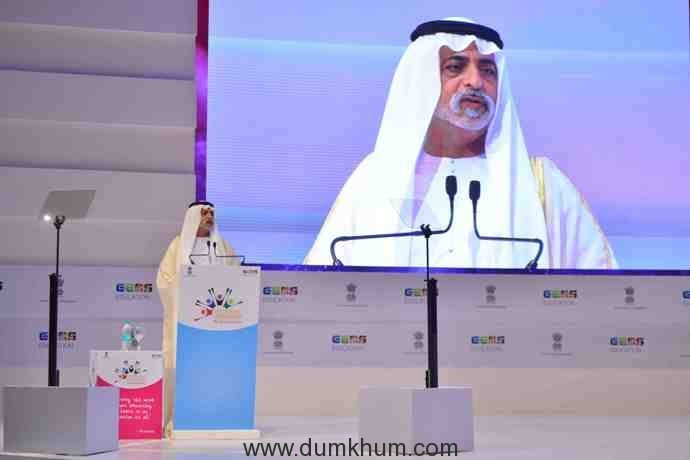 -Other Highlights from the Festival of Education- His Highness Sheikh Nahayan Mabarak Al Nahayan, Minister of Culture and Knowledge Development, UAE was the Chief Guest at Festival of Education. He highlighted that every child should get the right to education, adding that education plays a key role in the personal and social development of any human being as it enables children to acquire knowledge and skills, to help define their future. He called upon parents and the entire society to join the governments to ensure children receive a quality education and to help the overall development of the young next generation. Rt. Honourable Chief Minister of Rajasthan Vasundhara Raje said given the geographical and demographic circumstances of the state of Rajasthan, providing quality education to children in the State was a big challenge. Accepting this challenge, her government brought major changes in the educational set-up and made it learning based. The efforts are helping talented students to obtain opportunities of higher studies in medical, engineering, law, management and other such disciplines. These subjects were basic to the development of humanity, she added.

Teachers are important for making of any nation and they should adopt themselves to the upcoming changes. For this, the government was improving their skills and capabilities by providing them training for new teaching methodologies and syllabi. Realizing the fact that degrees alone are not enough for the youth to upsurge in life, the state government had focused efforts on skill training along with basic education. Rajasthan was amongst the top state in India providing skill education to its youth. Also, two new skill focused universities have been established in Rajasthan.

She invited the private sector establishments to invest in the development of basic infrastructure in education.

Union HRD Minister Shri Prakash Javadekar said countries focusing on research and innovation excel in the world. Prosperity based on natural resources had its own constraints of time and only innovations and adaptations could make it everlasting. Praising the state government’s efforts for making school education useful and relevant in Rajasthan, he said that these ideas were being followed by other states. Improving the quality of education could ensure the development of the country and in the recent past the entire nation had discussed and debated the need to reduce the gap between an academic degree and a certificate of skill.

Member of UK’s House of Lords and Deputy Chair of British Council Baroness Usha Prasar commended Rt Hon. Vasundhara Raje for her vision and said that with the steps she undertook, Rajasthan would soon be an education hub. Present and future generations needed skilling along with education and the same was being offered in Rajasthan. Representing GEMS Education at the Festival of Education Mr. Amreesh Chandra, Group President, GEMS Education, India said “We are proud to present the Festival of Education. An initiative powered by GEMS for the Government of Rajasthan that is aimed at taking the education ecosystem of the country to the next level. India is now the new intellectual capital of the world and within that Rajasthan is poised to be the knowledge hub.”