MAX2 presents a double dose of your favourite superstars 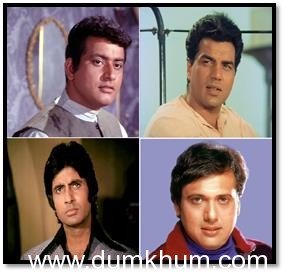 With its ‘Sunday Double Dhamaka’ film festival, India’s iconic movie channel, MAX2 proves that there is nothing as ‘too much of a good thing’.  The movie bonanza will present viewers with a double movie treat of their favourite legendary Bollywood superstars through back-to-back movies every Sunday at 4 pm and 7 pm through the month of April.

Commencing 5th April, the film line-up has Chi Chi superstar Govinda in two movies ‘Rajaji’ and ‘Hadh Kar Di Aapne’ that showcase the actor’s comic timing at its best. On 12th April the Bollywood star in focus is Dharmendra whose movies ‘Ghulaami’ and ‘Chupke Chupke’ will showcase him in versatile roles. The following week will have legendary actor Amitabh Bachchan in his angry young man avatar in ‘Ganga Ki Saugand’ and as a budding singer in ‘Yaarana’. The festival ends with a tribute to the patriotic superstar Manoj Kumar on 26th April through his two movies ‘Kranti’ and ‘Roti, Kapada Aur Makaan’.

Talking about this movie marathon, Neeraj Vyas, Sr.EVP & Business Head, MAX & MAX2 said, “Our movie festival ensures that viewers get variety whilst having their fill of their favourite star. Considering the popularity these legends enjoy with our viewers, we decided to showcase 2 films each of these iconic stars featuring them in memorable roles as a double treat for our viewers. We do hope they enjoy what is in store for them.”

MAX 2, a second Hindi movie channel from Multi Screen Media Private Limited, one of India’s leading television networks promotes great Indian cinema and appeals to dedicated movie lovers across the country. MAX 2 will not only cater to the needs of the discerning Indian audiences who appreciate rich Indian cinema but will also inspire newer audience to honor the glory of such movies. The magic of everlasting films never end and seem new every time you see them and this is the ethos with which the core thought of the channel campaign has emerged – ‘Jab Dekho Tab Naya’.