MAURITIUS DENIED PERMISSION FOR AKSHAY’S DANGEROUS STUNT IN THE SHAUKEENS Akshay Kumar is known for the death-defying stunts he pulls off. In his latest film, The Shaukeens, in which he plays his most special appearance, the stunt was so dangerous that even the authorities in Mauritius got scared and denied permission to shoot. It all happened when the film’s unit landed in Mauritius for a 40-day-long schedule. The stunt, where Akshay was supposed to hang underneath a flying chopper, was supposed to be shot there. But the Mauritian officials considered it too risky. Director Abhishek Sharma reveals, “Basically, we were to attach a couch underneath a chopper and make Akshay sit on it while the chopper was flying. And this was to be done in mid-sea. It took us two weeks to try and convince the Mauritian authorities but they refused to give us permission. They felt it was too risky. They believed that to pull off a stunt like this, they needed a pilot who could maneuver the chopper precisely. Even a fraction of second’s error could prove fatal.  They didn’t have a single pilot who had the experience to handle such a stunt.” It was tougher for them to grant permission because Akshay insisted on not having cables attached for safety. “Akshay felt that attaching cables would dilute the impact and we would lose those thrilling moments,” says Sharma. 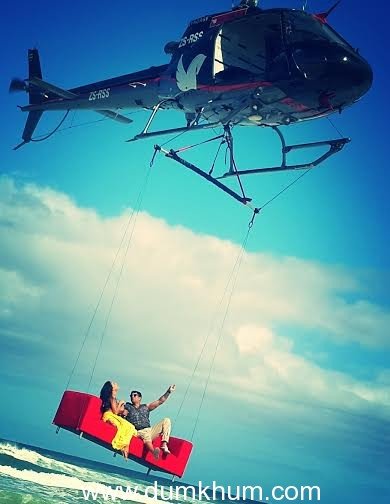 Eventually, the stunt didn’t happen in Mauritius for this reason. Finally, the film’s unit flew all the way to Cape Town just to shoot the sequence. Cape Town has some of the best action technicians in the world and the scene was canned there – with no cables attached. The danger prevailed there too because the water was ice-cold. Since the actor was not attached to the couch, a fall in the water could’ve led to serious consequences. Three teams of diving experts remained on standby at the shore, ready to move in the water just in case of any accident. “But thankfully, everything went well,” says the director. “In fact, Akshay even popped open a bottle of champagne on the couch.” The stunt is an integral part of the film, in which Akshay Kumar plays himself.