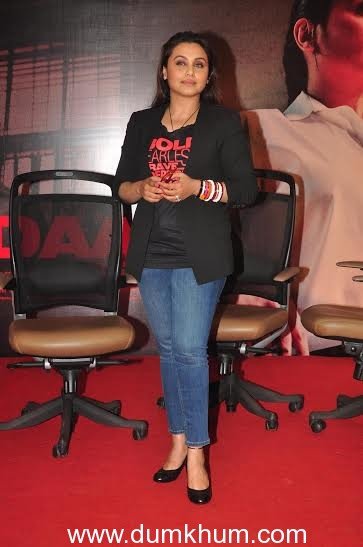 Rani Mukerji was in a very jovial mood as she addressed the media post just 4 days since the release of Mardaani. She seemed very pleased but at the same time was worried that the very purpose of the film gets lost if the girls in the age group 12 years and above are not able to watch it due to A certificate. She urged the NGO’s to come forward and help make the concerned authorities to understand the need. On being asked about the interaction she had with CM of Gujarat Anandiben Patel, she was all praise and raised the issue of having basic facilities for women in public places be made available  to which the CM gave her assurance… She was very keen to arrange a show of Mardaani  for Anandiben to see. Director Pradeep Sarkar was very vocal about how the basic idea of Mardaani took shape. He said that the Police Stations were the main sources of stories and the the actual incidents which were in Police records provided additional content. Writer   Gopi Puthran was roped in and the researched material was converted into story and Screenplay in such a way that it may not sound like a Documentary film but appear entertaining along with strong message which was intended to be conveyed through the film on Child trafficking. Mardaani which hit the silver screen this Friday had its success and appreciation press conference yesterday (Tuesday).
The entire team of the film Rani Mukerji, Pradeep Sarkar, Tahir and Gopi were present for the event and were in jubilant mood. Tahir Bhasin was also quite excited that his role and character was being appreciated. On being asked as to how he felt about working with   Rani Mukerji a Star, to which he humbly conceded that it took him virtually two months to break the barrier and get comfortable with his persona in the film. Rani madame made me at ease especially during the climax sequence. All in All I had a great time and had great experience working with Rani Mukerji and director Pradeep Dada.
The team also celebrated the film going tax free in MP and UP. The film has done very well on the box office earning 16.89 crores uptill Monday and the industry is abuzz about it. The film has been trending on media.
‎
Audiences have been sharing strong feedback and creating chatter on the web. The word of mouth is very strong.