Sunrise अ”णोदय (Arunoday) – Writer/Director Partho Sen-Gupta’s second feature – is a Marathi language film, selected as one of twelve films in Competition. The Busan International Film Festival is the most significant platform for promising young Asian directors and potential World Cinema leaders. All the films in this section are world or international premieres. More than two lakh spectators attended the festival last year, which also hosts one of Asia’s most important film markets, the Asian Film Market. 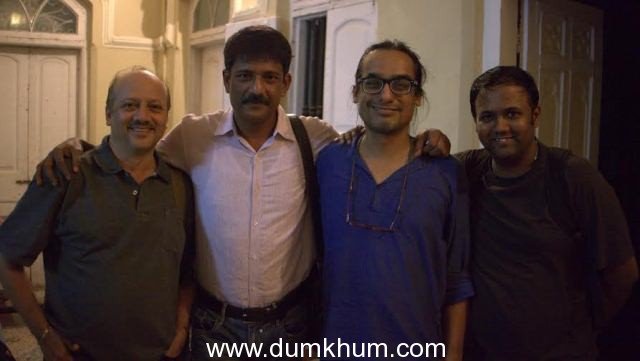 Sunrise अ”णोदय (Arunoday) is a psychological drama about JOSHI, a police inspector from Mumbai who has been looking for his 6-year-old daughter, ARUNA,

ever since she disappeared from outside her school over ten years ago. In his despair, Joshi’s life converges with a recurring dream in which he pursues a shadowy figure who leads him to ‘Paradise’, a dance bar where teenage girls are forced to perform to a leering crowd. He is convinced he will find Aruna there and vows to bring her back to Leela, his broken wife. “I decided to make this film when my daughter was born. When I looked into her tiny innocent face, I could not imagine the trauma that losing a child would bring about for the parents. Parents whose children are lost are condemned to suffer for the rest of their lives, constantly living with the vain hope that they might find them one day. My film is not a realistic film but a psychological journey into the mind of the desperate father ” says Mumbai born and bred director, Partho Sen-Gupta.

A recent report into missing children in India by the Home Ministry shows that over 3.25 lakh children went missing between 2011 and June 2014, at an average of nearly 1 lakh per year. http://tinyurl.com/timesofindia2014-08-07 National School of Drama trained Adil Hussain (Life of Pi, English Vinglish) plays JOSHI. Tannishtha Chatterjee (Brick Lane, Monsoon Shootout, Gulaab Gang) plays his grieving wife LEELA and veteran actress Ashalata Wabgaonkar plays for the first time in a negative role, that of RADHABAI, the brothel madam. Young actors Isha Amlani, Chinmay Kambli and Gulnaaz Ansari play other important roles. There are a host of other Marathi stage and television actors in supporting roles. Sunrise अ”णोदय (Arunoday) is the first Marathi language film to be co-produced as an official Indo-French co-production under the Bilateral Agreement on Film Co- production between India and France. The film is co-produced by Mumbai based Independent Movies, The National Film Development Corporation (NFDC), Paris based Dolce Vita Films, and other minority co-producers. The film was entirely shot in Mumbai with a mixed crew of Indian and French technicians. The Director of photography of the film is by Jean-Marc Ferriere, the camera operator is G. Monic Kumar, editing by Annick Raoul, art direction by Ravin Karde and dialogue by Yogesh Vinayak Joshi. The Post-production was carried out in Paris. In Mumbai, Joshi searches for his six-year-old daughter, Aruna, who one day, ten years ago, had not come home after school. A shadowy figure appears to be everywhere. Joshi must catch it before the Sunrise and save the children.