KALAPANA PANDIT invited Rajpal Yadav and Sushant singh to unveil the poster of her new film. She also took the opportunity to celebrate the 50 days of her film JANLEVA 555 and had the artists join in the cake cutting. 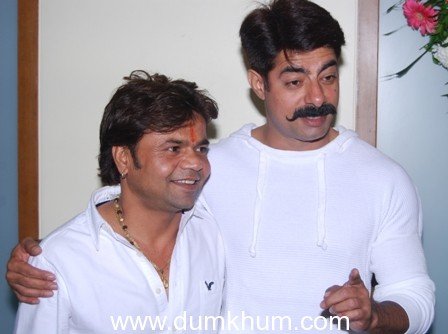 While Payal Rohatgi joined in with her boyfriend, Kashmira Shah was accompanied by her brother.

Speaking on the occasion Rajpal Yadav said,”Its great to know that distributors are taking initiative in boosting up the prospects of small films. I look forward to the release of the super duper comedy on 11th Jan 2013.” FOUR TWO KA ONE is produced by Sunil Shah under the banner BHUMII CREATIONS, and presented by Manoj Nandwana of Jai Viratra Entertainment LTD and Rais Khan of Jannnat Films. The film is being directed by Anwer Khan who has assisted late Manmohan Desai on films such as Mard, Ganga Jamna Saraswati etc. Anwer Khan has also penned the lyrics for the film, as well as the screen play. Producer Sunil Shah says, “Four Two Ka One is a lovely movie with interesting story, great music and a visual delight. Anwer Khan has come up with this hilarious comedy about two friends who turn to a life of thievery. It’s a complete entertainer with a good feel factor.” Manoj Nandwana of Jai Viratra Films comments, “It’s a truly entertaining film and I am glad to be a part of it. I am also very excited about my new project TUM HO YAARA with Kalpana Pandit, Shobana, Ganesh Venkatraman and others.” TUM HO YAARA will have Kalpana Pandit wearing Co-producer’s hat as well as the actor’s hat. It’s a romantic thriller filmed in USA and India. The film stars fresh faces and will be produced by Dreams on Frames and House of Pandit and directed by Natty Kumar & Dr Jay. House of Pandit was established in 2010 and recently released their first full fledged Feature Film’ JANLEVA 555’, where Kalpana Pandit played the lead role.

SYNOPSIS OF FOUR TWO KA ONE:-

Raja suggests they commit a huge robbery and hence they robbed a bag belonging to Chawla (Murli Sharma), who is a very dangerous man. Inside the bag they find a statue of Lord Krishna worth approx 20-25 crore. Raja and Vijay do not see eye to eye on what to do with the stolen statue. Vijay wants it to be returned to the owner. After returning it to the owner, somehow the statue lands up in their hands again. Vijay and Pooja get engaged and on the same day Raja sells the statue to Seth Karoimal. Eventually Pooja finds out the truth about Vijay and is very upset that he cheated her.

Tum Ho Yaara” is a Romantic thriller made by the production company Dreams on frames in association with House of Pandit. “Tum Ho Yaara”.The best thing about this movie is the depth of the plot and a unique screen play along with fabulous performances by the actors.Another plus point about this movie is the songs and sequences are shot in exotic locations of USA. You cannot see too many “cliches” in Tum Ho Yaara which is always a good sign in a romantic movie.

It does not matter whether you love romantic movies or hate them, this is NOT just a romantic movie it is so much more than that. By the end of the movie you will feel a whole heap of emotions. You will be talking about this movie for a long time. Hitting the screen by 2012 spring around the romantic month of Valentines, it will be a worth watching.