Barun Sobti and Shenaz Treasurywala along with the film’s director and music crew launched the thumping Punjabi Pop number ‘Desi Daru’ from the upcoming romantic comedy movie ‘Main Aur Mr Riight’ today. The title’s high-spirited thump, catchy tune & entertaining lyrics wowed everyone at the launch as the cast along with director Adeeb Rais and producer PoojaGujral got behind the counter and tried their hand at bartending . 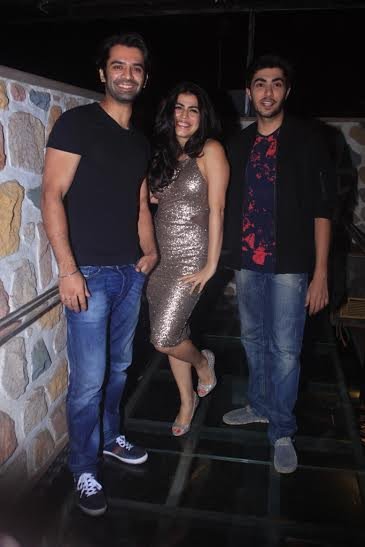 ‘Desi Daru’ is picturised on the posh and prim Alia, played by Shenaz Treasurywala and the rustic, loud yet likeable Sukhi, played by Barun Sobti.  Comparing two favourite drinks of two diametrically different kinds of people, the song plays out like the immediate rush one gets from these drinks- a tequila shot &‘desi daru’ (Indian made country liquor). Popular Punjabi pop singer Jasbir Jassi delivers this potential chartbuster to composer Jaideep Kumar’s tune. And the catchy lyrics that bring a smile to your face have been written by Raj Hans. The result is a fresh and energetic number that will immediately catch up across the country. Releasing on 12th December, 2014, ‘Main Aur Mr Riight’ is a romantic comedy about a sophisticated city girl’s search for her perfect man. The trailer intrigues with her pick of a rustic Punjabi Munda ‘Sukhi’ as the ‘Mr Riight’ that she trains to her standards. The film features one of Indian TV’s biggest stars, Barun Sobti as Sukhi and Shenaz Treasurywala as Alia. Teasing the audience with this crisscrossed love story, the film’s lead pair displays natural chemistry, lots of drama and tons of laughter. With it’s Punjabi thump and a fun video to go along with it, ‘Desi Daru’ is catching up on Youtube and social media fast. About Main Aur Mr. Riight: The story revolves around two diametrically opposite people and deals with finding a partner who makes you happy rather than just being someone who falls into place with your checklist of perfection but cannot provide you happiness. ‘Main Aur Mr Riight’ is directed by Adeeb Rais and is produced by Pooja Gujral. The film will hit the theaters on 12th December, 2014 across India.