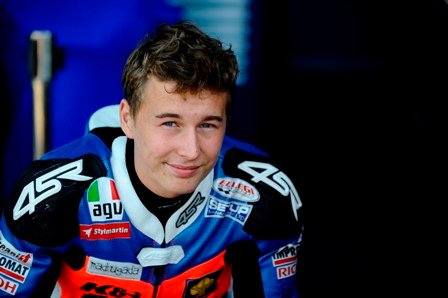 Brno, August 26, 2012: With both regular riders out injured, Mahindra substitute rider Miroslav Popov raised the team’s spirits and proved the MGP-30 machine’s progress with a stirring race in difficult mixed conditions at Brno.

Although in the end it came to naught, with the 17-year-old Czech GP novice crashing with five of the 19 laps of the 5.403-km track remaining, his performance until then had been extraordinary. He showed not only his own precocious skill and bravery, but also affirmed that the latest upgrades moved the Mahindra another step forward in the quest to achieve competitiveness in the 250cc four-stroke Moto3™ class.

While full-time riders trod cautiously on a dry surface with extensive damp patches, Popov rode at maximum risk, moving from 29th on the grid to sixth at the end of the first lap, then pressing on through to third place on lap four.

In only his fourth GP, at a track where he has limited experience, he was still in the top five at half distance. By then the seasoned title contenders had come to terms with the tricky drying surface, and he was soon among a big pack of the best and most experienced riders in the class. But he was not over-awed, and was battling hard to stay in the points when a clash with another rider put him onto a wet patch and he slipped off unhurt, gesturing angrily at the departing pack.

Excited Mahindra Racing CEO Mufaddal Choonia could not praise his efforts enough. “Popov did a fantastic job. When the track was half-wet and half-dry, he had a good rhythm.

“I am happy because the bike was also good, and we have made another little step. We have found reliability and a better top speed. We just need a little more acceleration now,” said Choonia. Working closely with Mahindra’s own engineers, SRT will develop an all-new engine and chassis for the Indian automotive giant’s 2013 Moto3 efforts.

“I can’t say we will be competitive from the beginning, but we will work day and night to achieve success in the shortest possible time,” said Mr. Shukla.

The Mahindra MGP-30 is one of a small handful of independent machines in a field of proprietary motorcycles from established racing manufacturers. The only Indian team in the championship chose the harder route but ultimately more rewarding path of developing its own machine, to take advantage of the technological lessons for Mahindra’s range of street motorcycles and scooters.

The race was won by German Jonas Folger, his first victory of the year.

MIROSLAV POPOV – Did Not Finish

“In the first laps the other riders were going only on the dry line. I took more risks on wet patches, and it paid off – I got up to third. It was a fantastic feeling: I didn’t expect that in only my fourth Grand Prix. Later I was among a big group of fast riders, and maybe my mistake was to try to stay with them – braking very late and going very fast in the corners. The Mahindra chassis means you can ride hard like that. I was fighting back after someone passed me and we touched and he put me onto a wet patch, and I crashed. Sorry for that.

A USD 15.4 billion multinational group based in Mumbai, India, Mahindra employs more than 144,000 people in over 100 countries.