A new clutch and the latest heavier crankshaft showed some improvement for the Mahindra MGP-30 at Aragon, but the nature of the circuit made it a hard afternoon for riders Danny Webb and Miroslav Popov.

Webb (21, from England) finished 25th after moving through from last on the first lap. Team-mate Popov was following on, but retired with electrical problems with three of the 20 laps of the 5.078-km circuit to go.

Webb’s first lap spoiled his afternoon – he started well but was baulked by other riders and then put off the track when somebody crashed next to him. From then on he was playing catch-up. 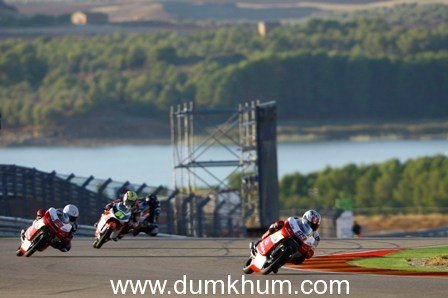 The circuit’s straight of almost one kilometre did not favour the Mahindra – the Moto3™ machine’s strong point is handling rather than top speed.

Mahindra, the first and only Indian team in MotoGP, is one of a small handful of independent machines on a grid made up of proprietary racers from established manufacturers. The development road is hard, but the ultimate engineering benefits to the company make the struggle worthwhile.

The race was won by Spanish rider Luis Salom. 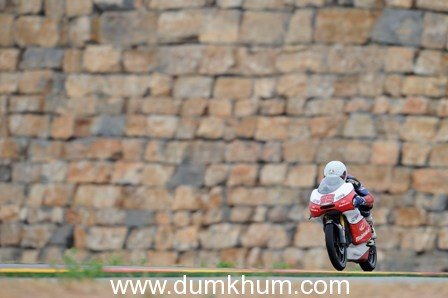 I got a fair start but a few people were going crazy round me and after crashing on the first corner at Misano I was a bit cautious. Then I got put off track by another rider crashing. I got back in last. I managed to pick up some places, but it was hard. I was down on top speed, and wet practice left us short of set-up time … and on this bike everything has to be perfect. It was still a big step compared with qualifying. The new slipper clutch makes the bike a lot more stable under brakes, but I’m still getting used to the feeling. 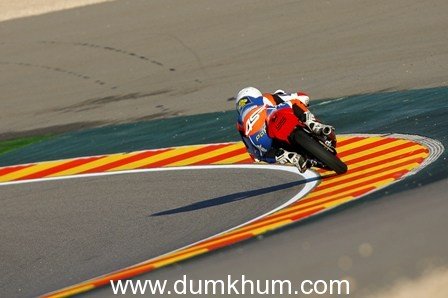 MIROSLAV POPOV – Did Not Finish

It was not such a bad race – after difficult practice I was able to get to my target lap times. I was stuck behind a slower rider, and I could have gone faster if I could have got past. Then with six laps to go the engine sounded different, and two laps later it started to cut in and out, and I had to stop. It was something with the electronics.

I am not happy, but also not unhappy. We saw an improvement day by day for Popov, who is a good rider. He just needs experience. Danny had a problem on the first lap with other riders, and after that his chances were gone.