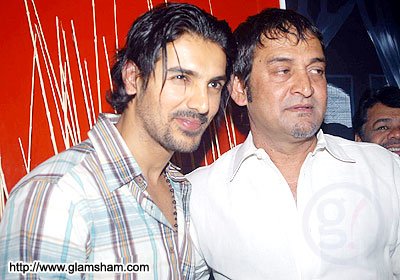 In preparation to play a role on the lines of infamous gangster Manya Surve in Balaji’s Shootout at Wadala, John Abraham not only is working on his physique but also brushing up on his colloquial Marathi – And helping John in doing that is Mahesh Manjrekar.

Directed by Sanjay Gupta , the  prequel to the runaway hit Shootout at Lokhandwala is based on the first ever recorded encounter in Mumbai.

Being an ace at the language ,actor-director and close friend of Sanjay Gupta –Mahesh Manjrekar will act as tutor in preparing John for his role.

Confirming the news says director Sanjay Gupta “John till date has never used rough language in his films.I want him to have the basic knowledge of colloquial Marathi as it will help him grasp the minute details of his character . Mahesh is going to help us out.So,he will meet John a few times,by the end of the month to discuss the nitty –gritties of Marathi.We are keeping their interactions at the end of February since the film goes on floors in March.So,things will be fresh in John’s mind by the time the first schedule kicks off.”

If that wasn’t all ,Mahesh may also act in the film on director Sanjay Gupta’s request.“I have asked Mahesh to choose a role for himself..We go back a long way and I wanted to continue the association with Shootout at Wadala.Plus,he is a superb actor .So he will be part of the film for sure”adds Gupta.