Mahesh Bhatt Supports ‘The Vanishing Act’, the film made on missing Malaysian Airline by Rupesh Paul. 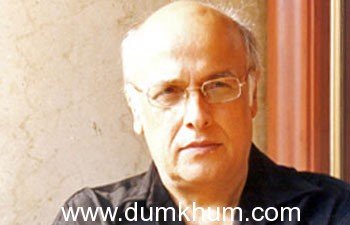 Mahesh Bhatt’s Quote : “I can understand if families (of the passengers of flight MH370) object to a film of such nature, for their wounds may still be fresh, but what business does the international media – that has itself sensationalized the subject of the missing plane – have to raise moral hackles over the film?” Director Rupesh Paul thanks Mahesh Bhatt, responds to allegations
Talking to the media soon after his return from the Cannes film festival, director Rupesh Paul, skewered by the International media for his movie on the missing Malaysian Airlines Flight MH 370 thanked veteran filmmakers like Mahesh Bhatt for their support to him.
Director Rupesh Paul’s new movie ‘The Vanishing Act’ pitched at the Cannes film Festival this year came under heavy criticism over a 90 second trailer.  Pilloried by the International media for the subject matter of the teaser, Rupesh Paul has spoken for the first time on the harassment he faced.
Explaining the start of the course of events, director Rupesh Paul, “I was approached by a frustrated journalist from Malaysia whose investigative report on the Missing MH 370 flight wasn’t seeing the light of the day for many obvious reasons. Being a former journalist myself I know the heartaches suffered by reporters; value of investigative reports and how they belong to the public domain. So the idea looked good for a movie, and we titled it ‘The Vanishing Act”
On the allegation that he was trying to make money out of a tragedy, the director replied, “Look, making movies involve money. Every filmmaker tries to recover money from his project. Even newspaper needs money and profit. What’s so wrong in it?”
So did the international media cross the line? “Yes, of course. My only sin was to pitch a trailer to find co-producers at Cannes. The teaser wasn’t meant for the internet or public. And, I had apologized for a few visuals shown in the trailer. But people continued to haunt me treating me like a criminal who had committed some heinous crime. It was nothing short of torture with lethal verbal darts on an easy target like me”
Asked if would still go ahead with the project after all the persecution suffered, the director said, “I’ll never step back.  This movie is definitely going to disclose bitter facts about people and nations. Perhaps, that’s the reason people are up against me with poisonous campaigns. So, I am extremely grateful to senior directors like Mahesh Bhatt for their support. I’ll always be indebted to them”