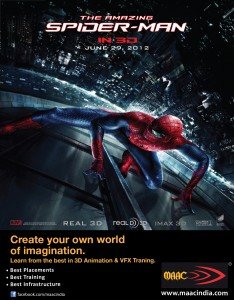 MAAC (Maya Academy of Advanced Cinematics), the foremost & world-class animation & VFX training academy which has proven its skills in providing training with superior infrastructure & facilities, has associated with the upcoming Hollywood release “The Amazing Spiderman”. Since the film showcases high-end VFX & stunning animation, the alliance is a step towards providing an inspirational platform for their aspiring students in India.

“This alliance for us is a step towards creating an innovation for MAAC – by aligning with an entertainment platform, thereby reaching out to our core target – aspiring students in India who wish to look at animation & VFX as a serious career.  With this alignment, MAAC looks at a bigger picture for its students by motivating them to have higher aspirations in this field and forge ahead with great confidence in their skills. It reflects the technological expertise that MAAC imparts to its aspiring students, showcasing potential and growth that one looks out for in his career choice.”

A co-branded TV campaign has been launched across national channels which blends the brand & film seamlessly in a creative that links the fantastic visual effects of the film providing an inspirational creative platform for all aspiring students who wish to pursue animation & VFX as a career.

Says Sharda Ratnam, Vice President, Branded Content, Blue Bang Media & Entertainment, the agency behind the alliance, “This alliance was developed keeping in mind the overall objectives of MAAC. The animation industry in India is poised for tremendous growth potential & is growing in stature upto international standards. By aligning with a film such as The Amazing Spiderman, MAAC positions itself as a leader in the Animation & VFX industry.

The creative was developed by seamlessly integrating those jaw-dropping, spectacular shots from the film which showcase the stunning visual effects & Spidey’s world. The key idea was to create an inspirational promo that would prove to be a creative springboard for the MAAC students. Since the core philosophy of MAAC is providing the best training in this field, we have amplified this in the creative by linking it to one of the most anticipated & relatable characters in film history, Spiderman which has a deep connect with most youth.”

About ‘The Amazing Spiderman”

One of the world’s most popular characters is back on the big screen as a new chapter in the Spider-Man legacy is revealed in The Amazing Spider-Man™.

This superhero film directed by Marc Webb, is based on the comic book of the same name and stars Andrew Garfield as the Marvel Comics character Spider-Man. It is the fourth Columbia Pictures film that portrays Spider-Man in film and a reboot of the popular film franchise that has spawned an entire merchandising industry & captured the imagination of audiences across the world. The film will portray Parker as his super powers are evolving in high school. Distributed by SPE Films India, the film releases across screens in India June 29th.

Maya Academy of Advanced Cinematics (MAAC) is India’s leading educator in high-end 3D Animation and Visual Effects. Founded in 2001 & a major brand of Aptech Ltd, MAAC has trained over 30000 students across the country. It has over 80 centers with cutting-edge infrastructure in over 40 cities.