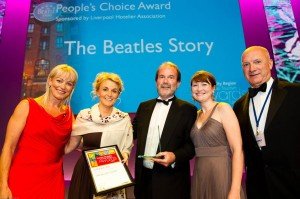 It is the first time that the influential awards have including a People’s Choice category  – voted for exclusively by members of the public, reflecting their own experiences of Liverpool’s best loved tourist attraction.

Now in its twenty-second year, The Beatles Story has welcomed millions of tourists from all over the world to Liverpool all eager to explore the history and legacy of the city’s most famous sons. In that time it has become the must-see attraction and helped promote the city on a global platform organizing tours and exhibitions from Prague to New York City.

In 2010 The Beatles Story helped bring the John Lennon Peace Monument to Liverpool which has since become an important attraction for Beatles and Lennon fans the world over.

“It is a great honour to win such an auspicious award voted for by our customers. The quality and standard of Liverpool’s tourism offer is very high indeed – as reflected by all the nominees across last night’s award categories – and our staff work hard to exceed customer expectations year in year out.”

Pam Wilsher, Head of Visitor Economy Development for the Liverpool LEP, commented: “These awards recognise and reward excellence in this important and growing sector, and the winners and finalists all play a vital role in the region’s flourishing Visitor Economy. Every year we are encouraged not only to see record numbers of entries, but the quality benchmark rising higher and higher.

“Liverpool Celebrates 50 Years of The Beatles is a year-long programme of events to mark this historic year, so it was fitting that their immeasurable contribution to the tourism sector be acknowledged. And their popularity amongst the general public remains high with The Beatles Story picking up the People’s Choice Award.”