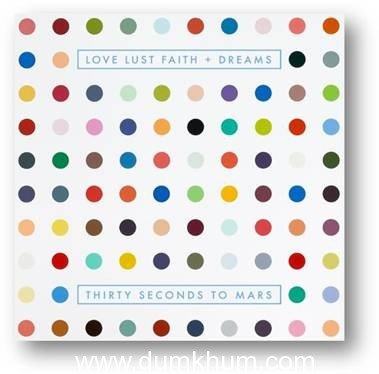 New Single “Up In The Air” Premieres Today In

Space And On Radio Worldwide

“Up In The Air” Set For Global Release

Love Lust Faith + Dreams, the new album fromThirty Seconds To Mars, will be released on May 21 by leading music label Universal Music India. Written and recorded around the world from Europe, to India, to the band’s studio in California, LOVE LUST FAITH + DREAMS was produced by Jared Leto with previous collaborator Steve Lillywhite (U2, The Rolling Stones, Peter Gabriel) co-producing four of the twelve tracks. Jared says that “this is more than an evolution; it’s a brand new beginning. Creatively, we’ve gone to an entirely new place, which is exciting, unexpected, and incredibly inspiring.”

In partnership with NASA, THIRTY SECONDS TO MARS launched the first single from the new album into space. Literally.The first copy of “Up In The Air” was recently carried aboard the SpaceX cargo mission to the space station.The singlegets its ground breaking premiere today from the astronauts in orbit 230 miles above Earth.Thirty Seconds To Mars will be standing by at Mission Control Houston while the track is played and will do a Q&A thereafter with Tom Marshburn, one of the astronauts aboard the space station.

The single premieres on radio worldwidethis morning. “Up In The Air” will be available at all digital retailers worldwide beginning at midnight GMT on March 19.The iTunes pre-order for Love Lust Faith + Dreamswill launch simultaneously. Fans who pre-order the album on iTunes will instantly receive a download of “Up In The Air.”

The album cover for Love Lust Faith + Dreamswas revealed today on the band’s social networks. It features “Isonicotinic Acid Ethyl Ester”(2010 – 2011)from internationally renowned artist Damien Hirst’s Spot Paintings series. A second Hirstwork, which is from the Colour Charts series, will appear on the CD itself. See below for further details regarding the art.

Love Lust Faith + Dreamsis the band’s fourth studio record. It follows This Is War, which was hailed as “an artistic triumph” by Alternative Press, “a shimmering epic” by MTV.com, and contained the No. 1 Modern Rock radio hits “This Is War” and “Kings and Queens.” During its two-year tour in supportof This Is War, the band sold out arenas around the globe, playing over 311 shows in nearly 60 countries on six continents to three million people – and breaking the Guinness World Record® for the longest ever concert tour by a rock band.

Thirty Seconds To Mars – comprising Jared Leto, Shannon LetoandTomoMilicevic– has sold over five million albums worldwide and the band’s videos have more than 300 million views on YouTube. The group has received numerous awards, including a dozen MTV awards worldwide, a Billboard Music award and honors from NME, Kerrang!and Fuse.

Artifact, a documentary about the band’s battle with its record label, has won the People’s Choice documentary award at the 2012 Toronto International Film Festival, the Audience Award at the 2012 Gotham Independent Film Awards and it was also an official selection of the 2013 SXSW film festival.