KUNAL VIJAYAKAR UNVEILS ‘MADE IN INDIA’ Food critic and TV host Kunal Vijayakar‘s launched his maiden cook book “Made In India’- a compendium of especially tweaked recipes to suit today’s fast-paced life. Hosted by trident Nariman point, the evening was unusually warm, full of fun laughter and anecdotes shared by Kunal’s special friends about him. Boman had the crowd in splits, while Rashmi, Perizad, Bharat and Nisha recounted some special Kunal memories while wishing him well. Michelin starred chef Vineet Bhatia, Chef Joy Bhatacharya , actor Kayoze Irani, were called endearingly on stage to be part of the champagne . The stage thronged with close friends of Kunal who have been part of his journey and he endearingly acknowledged all of them and they in turn applauded him for his creativityBoman Irani, Perizad Zorabian, The champagne evening had a special spread of hours d’ouvres picked  from the book specially recreated by chef Joy Bhattacharya for the evening. 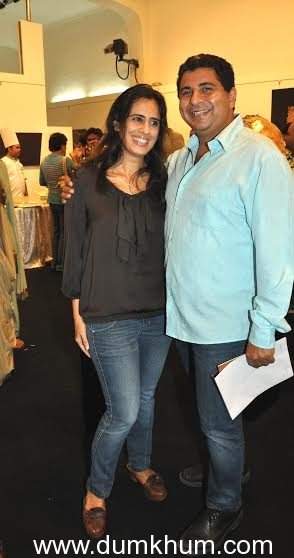 ‘Made In India’ a collection of Kunal’s favorite effortless recipes- some forgotten and some beloved food that India has to offer- are uncomplicated, only some need the effort, perseverance and love that good food demands. On his journey across the country, Kunal discovered some delectable and unexplored food joints and kitchens that led him to catch the culinary bug and Kunal recreated his memories including information while recounting some special experiences alongside his recipes. The dishes in the book are also evocatively photographed, including pictures of some of the author’s favorite food moments.