Hrithik Roshan flew from the US to Hyderabad, to launch the first Bollywood motion poster of his Diwali release, Krrish-3, on a popular social networking platform Facebook..  though he is jet lagged, it is hard for the superstar to contain the excitement in his voice. “I’m honoured,” he says, adding, “It was the birthday of this mammoth social networking platform and they chose to celebrate this momentous occasion with the launch of our poster.” Hrithik has got crazy response from fans.  The number of people who came for chat is 4.15 lacs and number  of countries that participated is above 60. There were over 2lakh Krrish 3 tweets n Hrithik has been  trending on twitter for 3 days now. Hrithik  is happy that he got a chance to see a flash mob — that was a part of the celebration. , “I have seen flash mobs on TV and heard about them, but to actually see one happening right in front of your eyes is a great experience. I got a lot of love from the hundreds of people present and I gave a lot of love.” 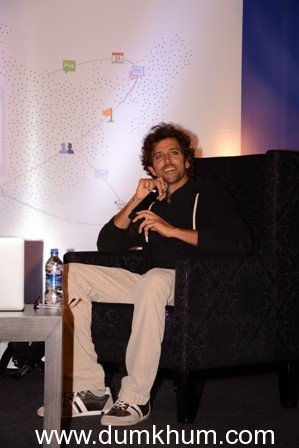 The overall experience has left me feeling more empowered. The film arrives on  Diwali. A sequel to Krrish, the film has been produced and directed by Rakesh Roshan and has music composed by Rajesh Roshan. Apart from Hrithik in the title role, it also stars Priyanka Chopra, Vivek Oberoi and Kangana Ranaut. Many foreign technicians are part of the project, including action director Tony Ching Siu Tung.
Krrish 3, by FilmKraft, is slated for release around Diwali 2013.