Kashmera Shah’s love for Krushna began with “a one-night stand”! In a startling interview to Cine Blitz, Bollywood bombshell Kashmera Shah has dropped a real bomb! She has gone ahead and admitted in print that her relationship with her boyfriend Krushna began with “a one-night stand”! Oh oh!

Over a tete-e-tete that makes mush look obsolete and jaded, the hottie who has been living in with Krushna from almost six years; candidly revealed the little secret behind how it all began! “Before we landed on the sets of a film we were to do together, I didn’t even know him (Krushna). I knew I was to work with Govinda’s nephew in the film, that’s all. I never carried high heels hence”. Uff! 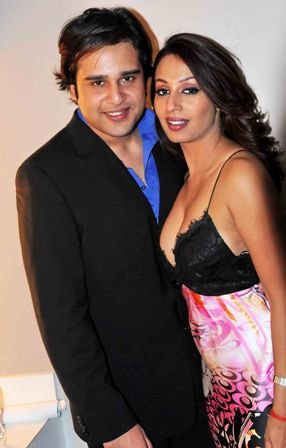 So was it during the course of the film they started seeing each other? “It was a one-night stand for both of us,” Kash boldly divulged, without even batting an eyelid!

What’s more! Surprisingly, the otherwise media-shy Krushna was as outspoken as his lady love! He added, “Actually that is how it happens with everyone… it is just that they do not admit. But after that night, she got a lot more caring towards me… bringing me khaana and all!”

Krushna further revealed, “Actually, Kash was giving me hints from the beginning itself. There was this once when we were seated in the van and the lights when off and I said, ‘Ab kya kare?’ Now that is something anyone would have said in that circumstance, and very suggestively our lady here says, ‘Kyun, kuch kare?’!!