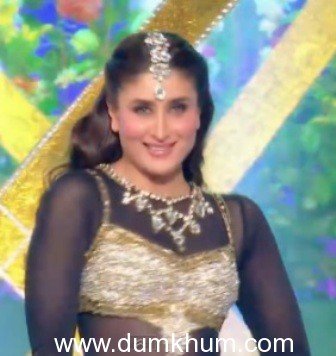 Kareena Kapoor Khan is known for her spectacular dance performances at various Award shows. Recently, having performed and mesmerized the audience at the Big Star Entertainment Awards, Kareena Kapoor Khan has performed at the Renault’s Star Guild Awards too, which will be telecasted on 2nd February on Star Plus. Gathering appreciation for her looks at the Big Star Entertainment Awards. Kareena Kapoor Khan had approached Designer Reza Shariffi to design her look for the Star Guild Awards. Reza explains, “The look was devised based on the songs which Kareena was performing at the Award function. As it was a medley of recent rocking numbers from her movies, I devised two distinct looks. In first part she performed in the Indian look and the second part culminating in finale, she wore the Fusion look. The black embroidered choli (or top) was a constant with both the looks.  In the first half of the performance, the black choli in combination with a deep fuchsia Ghaghara provided the Indian look.  While the black asymmetrical flared skirt with the cleverly designed choli instantly gave a distinct western feel to the attire. The striking mix of textures was provided by the use of net, Georgette, brocade and sequined fabric.  The embellishments and embroidery with the use of large and small ‘stones’, diamontes, kundan and salma-sitara giving the outfit a stunning quality fit for Kareena.” The Actress seems to have found a new Designer muse.